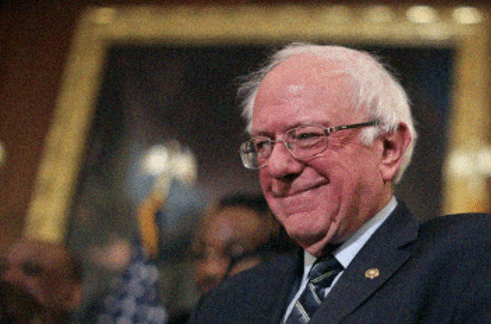 The 2020 presidential campaign of Bernie Sanders is off to a strong start: The Vermont senator outraised other Democratic contenders handily on his first day of internet fundraising and boasted easily superior numbers on social media.

According to his campaign, Sanders raised more than $5.9 million from more than 220,000 donors in the 24 hours following the announcement of his candidacy. He greatly outperformed the opening-day fundraising totals of other declared 2020 candidates, as well as his own in 2015, when he raised more than $1.5 million online in the first 24 hours.

In that campaign, Sanders shattered records for small-donation funding, and over the past two years, his staff has labored to build up an online media empire, releasing more than 1,000 films to his Facebook and Twitter pages.

The Vermont senator’s announcement video received nearly 5.4 million views on Twitter on the first day, surpassing all other 2020 candidates’ formal announcement or exploratory committee videos, the majority of which have been online for weeks. This is just one example of his digital dominance.

Sanders is now the only contender in the Democratic primary to launch a full-fledged presidential campaign; the rest of the field is playing catch-up. But the data indicates that many of his most ardent supporters support his re-election effort. at least at this early point of the campaign, for the White House.

Ten hours after he declared his candidacy, Sanders’ 2020 presidential campaign sent its first email to his followers asking for financial support at roughly 5 p.m. Two emails earlier asked for support for a petition he was circulating.

According to the campaign, Sanders’ supporters made recurring monthly contributions totaling $600,000.

Armand Aviram and Georgia Parke, two additional staff members who served as Sanders’ media producer and digital director in his Senate office, have joined the campaign.

Sen. Kamala Harris’ campaign reported raising $1.5 million in the first day after launching on Jan. 21, and her Twitter debut video has been viewed nearly 4.3 million times. Sen. Cory Booker’s introduction video has received nearly 4 million views on the website since he launched his campaign on February 1.

Sen. Elizabeth Warren raised more than $299,000 online on December 31, the day she announced her exploratory committee. Over 3.8 million people have viewed her exploratory announcement video. According to her campaign team, Sen. Amy Klobuchar raised more than $1 million in the first 48 hours of her campaign’s launch on February 10. Her announcement video also had 150,000 views.

The exploratory announcement video that Pete Buttigieg, the mayor of South Bend, Indiana, posted on Twitter had more than 1 million views.