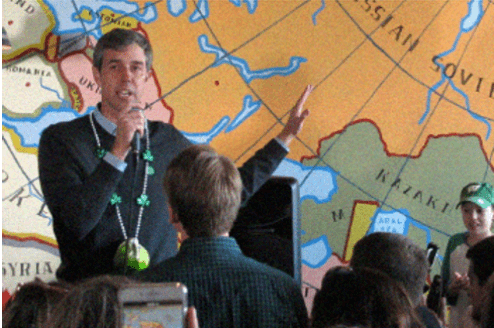 Iowa’s DUBUQUE — When Beto O’Rourke first commended Joe Biden, it might have been thought of as a diplomatic gesture.

When questioned about whether Biden should run for president outside of a campaign visit in Washington, Iowa, the newly minted presidential contender responded, “I don’t see why not.” “I believe he has performed extraordinarily well for this nation both as a senator and as vice president. I have the utmost respect for him.

Then it happened once again when a resident of Independence, Iowa, told 46-year-old Beto O’Rourke that he preferred to have Biden, who is 30 years older than O’Rourke, remain out of the race because he wanted “to see some young people run for president.”

O’Rourke might have left the remark alone, but instead, he defended Biden right away. And some hours later, Biden was still in his thoughts.

O’Rourke immediately and unprompted referred to Biden when asked in Dubuque how Democratic contenders might “remain together… instead of attacking each other.”

I sure hope Vice President Biden doesn’t get in the race, someone said at a meeting we were at earlier today in Independence, Iowa, O’Rourke recounted.

He continued, “And there was a point where I and the guy who made the statement differed. “I believe that having Vice President Biden in this race would be a great blessing. He can certainly contribute a lot of perspective and expertise, in my opinion.

Of course, O’Rourke is trailing top-tier Democrats like Biden in the polls throughout the early primary season. On his first visit to Iowa, a fan nevertheless urged him to consider another vice president—his own.

When asked to choose a female vice president if he wins the nomination, O’Rourke replied, “That would be my preference,” as he was leaving a home party in Dubuque.

“I feel, three days in, it’s arrogant for me to think about who I would appoint as a vice president,” he later told reporters. However, with so many wonderful women currently running, it would be very difficult to not choose a woman, as I also mentioned to someone inside.