×
Newsyolo.com > Latest > Biden is charged with “capitulation” to the Saudis. 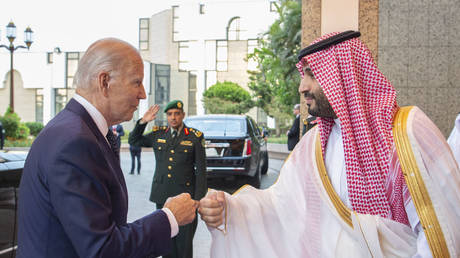 Biden is charged with “capitulation” to the Saudis.

A human rights organization accuses the US president of caving to pressure.

The US government has decided that Jamal Khashoggi’s 2018 murder warrant should not bar Crown Prince Mohammed bin Salman of Saudi Arabia from receiving immunity. In a court document filed on Thursday, the Biden administration referred to the prince’s appointment to the position of prime minister.

Hatice Cengiz, Khashoggi’s fiancée, and human rights activists have both reacted angrily to this suggestion.

US-Saudi relations were severely damaged by Khashoggi’s brutal murder in Turkey, which the CIA determined was the product of an order from bin Salman, also known as MBS. While running for president, Joe Biden made it a point to hold the kingdom and MBS personally responsible, pledging to make the nation a “pariah” on the world stage.

The US Department of State “recognizes and allows Prime Minister Mohammed bin Salman’s immunity as a sitting head of government,” the filing states. However, it “takes no view” on the validity of the lawsuit brought by Cengiz and the human rights group Democracy for the Arab World Now (DAWN) against the Crown Prince and his alleged “co-conspirators.” At the same time, it reiterates its “unequivocal condemnation” of Khashoggi’s “heinous” murder.

The judge will still determine MBS’ status despite the government’s request for immunity. Cengiz reacted to the news by saying, “Jamal died again.”

The head of DAWN, Sarah Leah Whitson, referred to the Biden administration’s action as “a capitulation to Saudi pressure tactics.” DAWN was founded by Khashoggi himself. She referred to media reports from March that claimed MBS had turned down Biden’s request to increase Saudi oil production unless the US government gave him immunity from legal action.

On the legal development, Saudi Arabia has not yet made any comments. Media reports state that the Crown Prince previously assured Biden that his administration had taken steps to stop “mistakes” like those made in the case of Khashoggi from occurring again in the future.