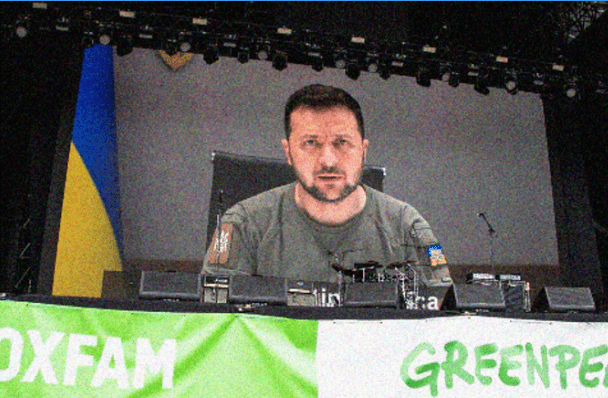 Volodymyr Zelenskyy, the president of Ukraine, has asked Glastonbury Festival attendees to “share the truth about Russia’s war” on his nation.

AP — PILTON, England Volodymyr Zelenskyy, the president of Ukraine, asked Glastonbury Festival attendees on Friday to “share the truth about Russia’s war” on his nation.

Before The Libertines’ performance at the British music spectacular, Zelenskyy addressed the fans in a video message.

The celebration, which was held for the first time since 2019, according to the leader of Ukraine, demonstrated that “the pandemic has put on pause lives of millions of people around the world, but has not broken.”

The most dreadful thing has happened: Russia has taken our peace, he added. “We in Ukraine would also like to live the life as we used to and enjoy the freedom and this glorious summer, but we cannot do that,” he said.

The largest concentration of freedom in the world today, Glastonbury, is where I turn for help because of this. I beg you to express my gratitude to everyone whose freedom is being threatened.

Zelenskyy pleaded with festival attendees to “share the truth about Russia’s aggression, support Ukrainians who are being forced to evacuate their homes due to the war.”

Thousands of people gathered at Worthy Farm in southwest England responded to the speech with a wave of raucous yells and applause.