×
Newsyolo.com > Business > Business | A massive, unfinished ship that will be scrapped 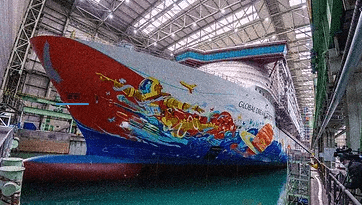 Business | A massive, unfinished ship that will be scrapped

Global Dream II, an unfinished mega-liner that was supposed to be among the largest ships in the world, will be scrapped after its owner, Genting Hong Kong, went bankrupt.

According to insolvency administrator, Christoph Morgen and the German cruise industry publication An Bord, the bankruptcy administration is currently attempting to resell portions of the ship’s equipment and engines. The incomplete ship’s hull, which is only complete in its lowest portion, will then be sold for scrap.

The ship’s sister ship, the Global Dream, which is currently stranded at the MV Werften shipyard in Wismar on the Baltic coast of Germany, is now the focus of the insolvency administration. ThyssenKrupp Marine Systems bought the shipyard, which went bankrupt early this year. The business is anticipated to use the facility to produce submarines and other navy vessels.

The enormous cruise ship is around 80% finished and seaworthy, so it can be towed “anywhere” around the world, according to the bankruptcy administration. The administration, however, has not been able to sell the ship as of yet. The purchase was being considered by Swedish shipping company Stena, but the possible transaction collapsed in May.

“We had several committed purchasers for the ship. The conversations ultimately centered on a party interested in taking control of the ship and running it alongside the other Genting shipping business ships,” Morgen recalled at the time.

The enormous ship might wind up in a scrap yard, like its tragic sister ship, if the administration is unable to find a new owner for it “in the coming weeks,” according to An Bord. With a gross tonnage of roughly 208,000, the cruise ships of the Global class were set to be among the biggest in the world. The ships might end up being the biggest ones in that regard because they could accommodate more than 9,000 people.

The coronavirus pandemic has had a significant impact on the cruise industry, with several lines going out of business as a result of Covid-19 and the travel restrictions put in place globally. At the beginning of the pandemic, enormous cruise ships served as breeding grounds for the virus, with both passengers and crew members becoming ill in large numbers in the cramped conditions of seagoing boats that frequently were trapped offshore owing to outbreaks.