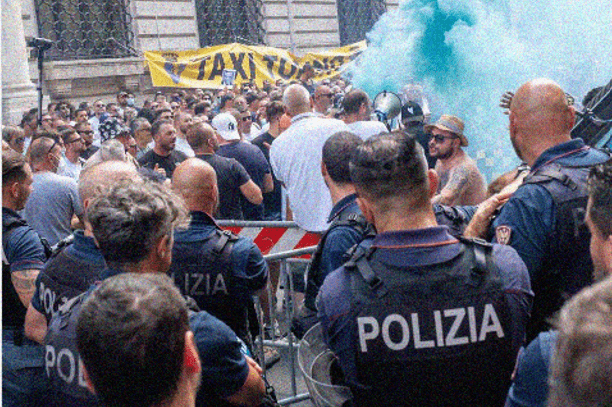 For a second day, hundreds of Italian taxi drivers have demonstrated against the government’s intentions to increase competition.

(AP) ROME — To oppose the Italian government’s intentions to allow more competition, particularly from share-ride services, hundreds of cab drivers in Italy on Wednesday left their vehicles unattended for a second day.

A few drivers protested on Tuesday by chaining themselves together in the square outside Premier Mario Draghi’s office; on Wednesday, as the wildcat work stoppage persisted, they were still chained there.

Hundreds of drivers from Rome and Naples gathered together in a busy street close to Piazza Venezia, Rome’s major square, to loudly protest. Several demonstrators lit colored smoke flares to attract attention. In another location in the Italian city, their cars were parked.

Drivers vowed to continue their demonstrations for at least one more day, if necessary, to further their complaints.

According to the Italian news agency ANSA, more than 200 cab drivers parked their vehicles in Turin’s central square as part of a similar protest.

Taxi drivers in Milan, the financial center of Italy, planned to meet later on Wednesday to determine how to protest.

The idea of liberalizing taxi services in Italy to include ride-sharing companies like Uber is opposed by the drivers. However, the European Union insists that Italy allow for greater competition in other areas as well as the transport industry.

To secure billions of euros in EU pandemic recovery money, Draghi is adamant about advancing changes to open up Italy’s economy.

On Thursday, a parliamentary commission was scheduled to consider a bill addressing competition in the taxi industry.