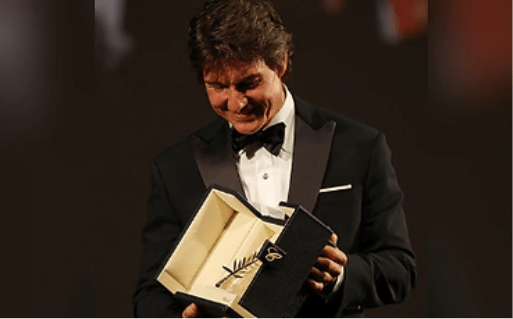 Cannes 2022: A Top Gun-worthy welcome and an honorary Palme d’Or for Tom Cruise

“My passion and love are movies. I always watch new movies when they are released “Tom Cruise commented

Tom Cruise attended the Cannes Film Festival for the first time in 30 years on Wednesday to promote “Top Gun: Maverick” and earned an honorary Palme d’Or while gushing about his love of film.

As the celebrities entered the screening for Cruise’s eagerly anticipated 1986 blockbuster sequel, the French Air Force display team flew through the sky over the red carpet.

The Covid epidemic forced the cancellation of the film’s 2020 French Riviera film festival premiere, which led to several postponements of the film’s distribution.

The cruise was adamant that it was worthwhile to wait till theatres were back in action and claimed he had never thought about making “Top Gun: Maverick” available on a streaming service.

In a discussion before the premiere, he assured a crowd in Cannes that “it was never going to happen.”

“I produce films for large-screen viewing. My passion and love are movies. I always watch new releases at the theatre. I’ll put on my cap and join everyone in the crowd.”

Along the Cannes seafront, admirers lined the balconies and stood on the roofs to get a glimpse of the celebrities, while some held up placards pleading for last-minute screening tickets.

Saying “No to war”

A film by Russian dissident Kirill Serebrennikov, who has been forced into exile since the invasion of Ukraine, kicked off the festival’s main category earlier.

The fact that “Tchaikovsky’s Wife,” his entry for the Palme d’Or, sheds light on the famed composer’s homosexuality — a subject that is still forbidden for Russian conservatives — is unlikely to help his relationship with the Kremlin.

After the film, he declared, “No to war.”

The director, who was unable to attend the festival for his first two nominations because of a contentious court dispute that prevented him from leaving Russia, continued, “I am certain that culture and people of culture can assist ensure that this war ends.”

With Ukrainian President Volodymyr Zelensky making an unexpected video appearance at the festival’s opening ceremony on Tuesday, the war has already been a significant issue.

The documentary “Mariupolis 2,” directed by Lithuanian Mantas Kvedaravicius, who was assassinated in Ukraine last month — purportedly by Russian forces, will have a special screening on Thursday.

One of Ukraine’s most promising directors, Sergei Loznitsa, will present “The Natural History of Destruction,” a film about the World War II bombardment of German cities, on a special day dedicated to the country’s struggling filmmakers.

As the movie industry tries to recover from the pandemic, Cruise is fighting to help the industry.

His 39 films have grossed just under $8.5 billion (8 billion euros) in total, and according to Box Office Pro, “Top Gun: Maverick” might bring in up to $390 million in the United States alone.

Its “slick aesthetics, crew camaraderie, thrilling aerial action, a startling emotional wallop, and, in Tom Cruise, a magnetic movie-star performance as reassuring as an old leather jacket,” according to Empire magazine, have received rave reviews from critics.

As Cruise entered the theatre for Wednesday’s showing, he unexpectedly won an honorary Palme.

He last visited Cannes in 1992 with his then-wife Nicole Kidman for the “Far and Away” film premiere. He is the only Hollywood megastar from that era to have continued to dominate the box office as he approaches 60 this year.

According to festival director Thierry Fremaux, “he has one of the highest success percentages in the history of cinema.”

“This is a person we haven’t seen on any streaming services, TV shows, or in any commercials. He is passionate about movies.”