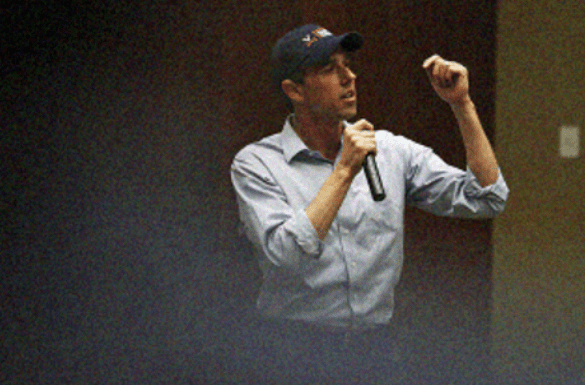 Beto O’Rourke said on Wednesday that he gave “thousands of dollars” to charities that weren’t listed on his tax returns and that his campaign is looking for proof of the gifts in response to criticism of the 2020 candidate’s low donating rate.

O’Rourke told media that he and his wife, Amy, had given more than what was listed on his tax returns, which the former congressman disclosed Monday night, because “it wasn’t vital for us to take the deduction,” according to Jenna Johnson of the Washington Post.

The Texas Democrat responded to requests for primary candidates to be transparent about their finances by publishing his returns going back ten years. He and his wife reported an adjusted gross income of $366,455 in 2017 and $1,166 in charitable contributions, which works out to a 0.3 percent giving rate.

Speaking to reporters in Virginia on Wednesday, O’Rourke defended his comparatively low giving rate by claiming he “never anticipated I’d be running for president,” therefore he “didn’t expect to release his taxes.”

He claimed that his family had also “donated time on the boards” and that they were “trying to go back to some of these groups to see if they can share with us, over the last 10 years, how much we have donated.”

According to The Dallas Morning News, O’Rourke’s remarks mirrored his response to a question asked by a college student on Tuesday at the University of Virginia. The student wanted to know why the former congressman donated less to charity than her sister, whose income was seven times lower than that of the candidate.

He stated, “I’ve held public office since 2005.” “I try my best to help my town, my state, and now my country succeed. There are quantifiable ways I accomplish this. And I do this in countless other ways as well.

The Wall Street Journal said O’Rourke and his wife may have underpaid taxes by failing to properly disclose their medical expenses in 2013 and 2014. The candidate said he will remedy the problem “as necessary” after learning of the story.

The former congressman is the most recent candidate trying to put out any fires that the publication of tax returns might start. Since his returns, which were made public on Monday, showed he earned more than $1 million in two of the previous three years, Sen. Bernie Sanders (D-VT) has come under fire from both sides of the political spectrum.

However, there is also criticism of those who are making efforts to be transparent, as well as a dig at President Donald Trump, who has consistently refused to reveal his tax returns.

Along with O’Rourke and Sanders, other politicians who have made their tax documents available to the public include Sens. Elizabeth Warren of Massachusetts, Kirsten Gillibrand of New York, Amy Klobuchar of Minnesota, Kamala Harris of California, and Jay Inslee of Washington. Sen. Cory Booker of New Jersey and Mayor Pete Buttigieg of South Bend, Indiana are two other Democratic candidates who have made similar commitments.