×
Newsyolo.com > Latest > Congressman: Biden is using the government as a weapon against Americans. 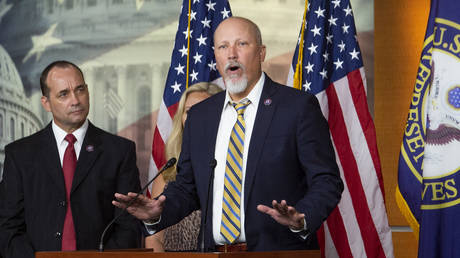 Congressman: Biden is using the government as a weapon against Americans.

Chip Roy, a Republican, joined his party’s members in calling for the president’s excesses to be curbed.

According to Rep. Chip Roy (R-Texas), the US government under President Joe Biden has turned into a repressive force against its people, he told a crowd on Wednesday at the Claremont Institute Center for the American Way of Life.

The congressman was participating in a panel discussion titled “What Should the Next Republican Congress Do?” were other well-known party figures also spoke. The panelists all agreed that the executive branch must be held accountable by a Republican-controlled House.

Roy emphasized that deeds rather than words spoke volumes when he said, “I think it’s important to know the extent to which this administration… has weaponized the federal government against the American people.” “Having some hearings and calling some people in and yelling at them isn’t enough.”

Roy recalled how the outrage of the father of a female student in Loudoun County, Virginia, who was raped in the girls’ bathroom by another student who claimed to be transgender, and how “the Department of Justice was very clearly collaborating with the National School Board Association with the White House to politicize.”

The congressman recalled, “He was being made the poster child for the Department of Justice…to be labeled a domestic terrorist,” before going on to list other instances of government “tyranny” under Biden. He concluded by saying that the administration’s response to that incident was “enough for me to want to burn the place down.”

Joe Robertson, a 77-year-old Navy veteran, was sentenced to 18 months in prison by the Environmental Protection Agency for constructing four ponds on his ranch in violation of federal water laws, Roy continued. He also brought up the Covid-19 pandemic, referring to the government’s response as “one of the biggest travesties that have happened in the history of Western civilization in this world,” particularly the Pentagon’s choice to discharge military personnel who refused to receive the vaccines.

Roy argued that it was up to Republicans to demonstrate “the extent to which the agencies are now weaponized against the country itself” now that they have control of the House of Representatives.