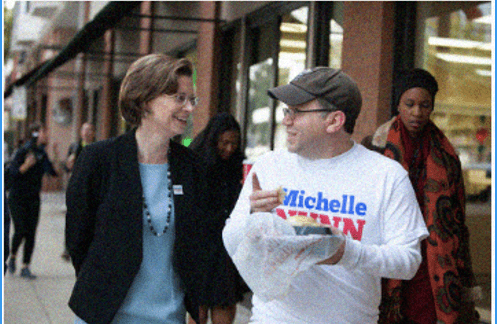 Together, a seasoned Democratic commercial producer and the former executive director of the Democratic Governors Association will launch a new consulting business.

Adam Magnus, a former partner of Shorr Johnson Magnus, which closed at the end of last year, and Elisabeth Pearson, who guided the DGA through the 2018 midterm elections as it won seven governorships, are launching a consulting company called Magnus Pearson Media.

In an interview, Pearson and Magnus stated that maintaining tight ties with the campaigns they are advising from the beginning will be a distinguishing feature of their new business.

According to Pearson, who has worked closely with Adam, “I feel that we have similar ideologies about what a media firm should bring to the table, and I know that excellent advertising is a crucial part of it.” But it’s also a full-time commitment from the start of the campaign to its conclusion.

According to Pearson, some consulting firms maintain their niches and only interject during specific campaign moments. However, the strategy of the new firm will be to support a client’s campaign all the way through.

Some businesses, in my opinion, still operate under the outdated assumption that you don’t have to work on everything else if you simply make the advertising. Pearson said. And I simply don’t believe that that applies to campaigns now. They should have high expectations for their media consultants, in my opinion.

Numerous candidates have sought the advice of Magnus and Pearson, who are also renowned for supporting prominent gubernatorial and senatorial candidates. Magnus, though, asserted that the company would consider applicants of all levels.

Magnus predicted that they will focus on races starting at the top and working their way down.

Pearson and Magnus are the only employees at the company right now, but they hope to hire a few more over time.

In addition to the DGA, Pearson has worked for the Democratic Senatorial Campaign Committee. She has contributed to other campaigns, including Sen. Tim Kaine’s (D-VA) bid for governor and Sen. Mark Warner’s (D-VA) bid for the Senate.

Pritzker lauded Pearson’s time at the DGA and the work Magnus did for his campaign in an interview. Magnus “really plunged in,” according to Pritzker, to the work on the Illinois governor’s campaign.

Magnus, according to Pritzker, “was also most frequently the voice of experience and reason and helped us manage a number of the significant obstacles and opportunities that we had throughout the campaign.” He expressed his “great admiration” for Pearson’s efforts while serving as the DGA’s executive director.