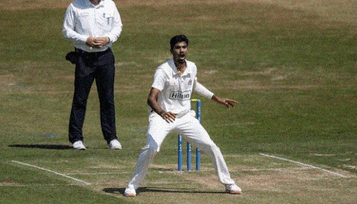 Washington Sundar is now the seventh member of Lancashire to debut with five wickets.

Washington Sundar, an all-around player for India, is off to a strong start both in the County Championship of England and following his injury recovery. He became the seventh Lancashire player to capture five wickets on debut after previously taking a wicket off just the second delivery of his first over.

In 22 overs, Washington finished the Northamptonshire innings with figures of 5/76. Before that, he had struck out New Zealand batter and opposing skipper Will Young. Rob Keogh, Ryan Rickelton, Lewis McManus, and Tom Taylor were the final four people he fired. Sundar’s batting abilities may now be tested because Lancashire lost five wickets for just 76 runs in 35 overs, while Northamptonshire was all out for 235.

Since the 2022 Indian Premier League’s halfway point, Sundar has been out due to injury (IPL). Along with fast bowlers Deepak Chahar and T Natarajan, Sundar then proceeded to the National Cricket Academy in Bengaluru to complete his recovery. He consequently missed both India’s recent trip to England and their five-match T20I series against South Africa. Additionally, he won’t be traveling with the team on their forthcoming limited-overs trip to the West Indies.

Before this, the 22-year-old had an interesting link to the storied Manchester-based team, which he discussed in an interview with Lancashire’s YouTube channel.

Sundar recalled playing Playstation versus the majority of the local games with the Lancashire team. “I used to be Andrew Flintoff,” said the former England cricketer, “because he would give me four overs of good pace, and he could come down at six or seven and will tonk some monster sixes.”

Sundar also expressed his delight at meeting England star James Anderson in addition to Flintoff. “also James Anderson was a legend who could hit the ball in both directions. I’m eager to meet him, see him bowl, and learn more about how he conducts himself over here.” During their famous careers in England, Flintoff and Anderson shined for Lancashire, and current white-ball skipper Jos Buttler also comes from this region.