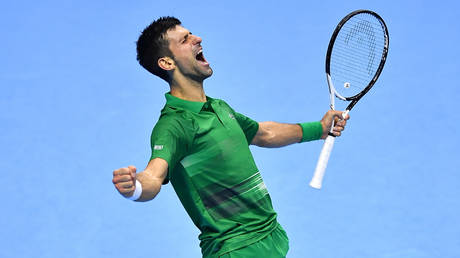 Djokovic defeats Medvedev to keep his winning streak alive at the ATP Finals.

The Russian opponent and the Serb battled it out over three sets in Turin.

At the ATP Finals in Turin, Novak Djokovic defeated Daniil Medvedev in three sets, but the arduous nature of the match was not ideal for the Serb ahead of the tournament semifinals in less than 24 hours.

Djokovic completed the group stage of the season-ending tournament with a perfect record after defeating Medvedev on Friday. He had already secured a spot in the final four after winning his first two round-robin matches this week.

But a brutal tug-of-war that lasted more than three hours was probably not the best practice for Djokovic before he faces Taylor Fritz of the United States on Saturday at the Pala Alpitour.

After defeating Felix Auger-Aliassime of Canada on Thursday to guarantee his place in the knockout rounds, Fritz will have had much more time to rest.

With two defeats in the group stage, Medvedev’s chances of reaching the semifinals had already been eliminated, so he was mainly competing against Djokovic for pride.

After breaking Djokovic’s serve in a marathon 15-minute game, the Russian was serving for the match with a comeback victory in mind when the score was 5-4 in the third set.

However, Medvedev missed the chance when Djokovic broke back to tie the match at 5-5 and then took control of the tiebreak, just as he had against Stefanos Tsitsipas earlier in the week.