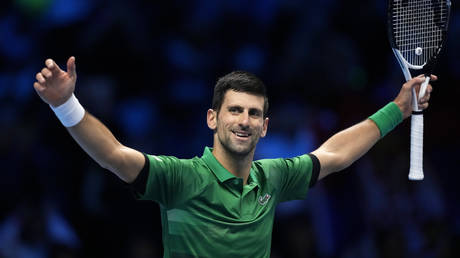 Djokovic wins an ATP Finals title that equals a record.

At the final tournament of the season in Turin, the Serb won.

After defeating world no. 4 Casper Ruud in the ATP Finals title match on Sunday in Turin, Novak Djokovic became the sixth player to achieve the feat, joining Roger Federer.

The 23-year-old Ruud was defeated by Djokovic after he went undefeated through the round-robin group stage and beat Taylor Fritz in the semifinals on Saturday. Djokovic again drew from his experience and played some electrifying tennis to break Ruud’s will.

In set two, the Serb continued to take the lead when he broke Ruud’s serve in game four and went on to win the set and the match.

Ruud easily defeated Andrey Rublev of Russia in the semifinals, but he was unable to generate even one break point on Djokovic’s serve throughout the match. In four matches against Djokovic in his career, the Norwegian is still winless.

While it was Djokovic’s first ATP Finals victory since 2015, it was his sixth overall.

With his Wimbledon victory and ATP titles at the Rome Masters, Tel Aviv, and Astana, Djokovic, 35, has finished the year on a high note after a season that began with his shady deportation from Australia but later featured other high points.

Djokovic will be among the strong favorites when play gets underway in Melbourne because he has been cleared to compete at the Australian Open in January after having his visa ban recently overturned. He is aiming for a record-extending 10th victory at the tournament.