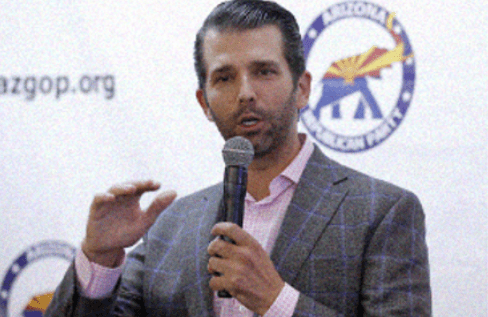 On Monday, Donald Trump Jr. will serve as the featured speaker at a half-dozen rallies to support Republican candidates in close races on election night.

Additionally, over the past week, Trump Jr. has worked to elect candidates to the House and Senate in Nevada, Arizona, North Dakota, and Nevada. In Arizona, Rep. Martha McSally is running in a tight Senate race against Democratic Rep. Kyrsten Sinema. In North Dakota, Rep. Kevin Cramer is running against Democratic Sen. Heidi Heitkamp. Kimberly Guilfoyle, Trump’s girlfriend, and a former Fox News presenter have been accompanying him on the campaign trail. She and Trump Jr. will share the stage at all six events.

In Nevada earlier this week, Donald Trump Jr. cautioned voters against passivity and cast the midterm elections as a vote on his father’s presidency.

Guess what, for those who say they can’t wait to vote for Donald Trump in 2020, he will be on the ballot starting next week, according to Trump Jr. I don’t want to wake up on Wednesday of next week and think, “Man, I wish we did one more rally,” he continued.

The candidates Morrisey and Republican Carol Miller in West Virginia, Rep. Andy Barr in Kentucky, Reps. Ted Budd and Mark Harris in North Carolina, Katie Arrington in South Carolina, and Rep. Claudia Tenney in New York will all be the targets of his rallies on Monday.