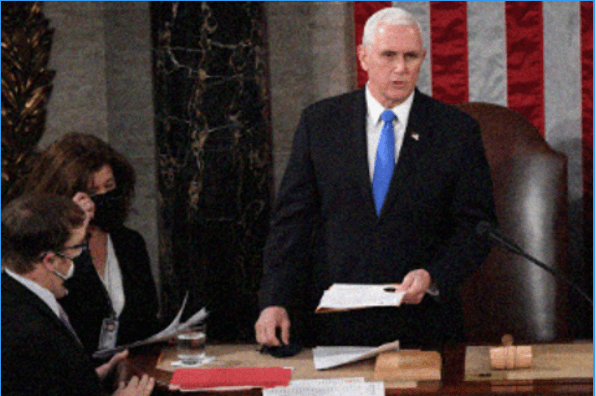 The vice president made this conclusion in a letter that was delivered to Congress on Wednesday afternoon before a joint session.

On Wednesday, Vice President Mike Pence told Congress that he did not think he had the authority to “reject electoral votes unilaterally,” thereby rejecting President Donald Trump’s calls for him to assist in overturning the outcome of the 2020 election.

The vice president’s opinion was included in a letter that was sent ahead of Wednesday afternoon’s joint session of Congress, during which Pence would preside over the lawmakers’ certification of President-elect Joe Biden’s Electoral College victory.

The Vice President’s Office made it available to the media as Trump spoke to his supporters at a rally outside the White House, during which he repeatedly urged Pence to help him overturn the election’s results. Legislators started into the House chamber at the same moment to begin the quadrennial proceedings.

“Some people think that as Vice President, I ought to have the authority to accept or reject electoral votes on my own. Others think that a challenge to electoral votes in a joint session of Congress should never happen,” Pence wrote in his letter. “I feel neither opinion is correct after carefully examining our Constitution, our laws, and our history,” the speaker said.

Several House Republicans and about a dozen senators have declared their intention to contest the electoral vote totals in each state. Their efforts have almost no possibility of becoming successful.

The vice president told Trump at a lunch on Tuesday that he will simply follow procedures allowing GOP objections and possibly make a statement related to election fraud during the congressional proceedings on Wednesday, POLITICO previously reported. Despite the president’s continued pressure on Pence to invalidate Biden’s Electoral College victory.