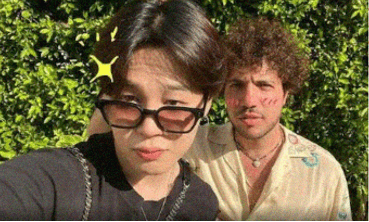 Recently, BTS, Snoop Dogg, and Benny Banco’s highly awaited song Bad Decisions was released. ARMYs had mixed feelings about the music video because they expected to see the septet in it but they weren’t there. The ARMYs are overjoyed because Benny has recently published a clip that includes Jimin from the BTS. The musician posted a video on Instagram in which he keeps his phone on the floor. If you play Bad Decisions and point your phone at the sky, BTS will miraculously emerge, according to a text message that arrives. Jimin soon takes up the phone and points at the camera while running his hands through his hair.

Benny commented on the video by saying, “I can’t believe this actually works.”

He had previously shared a selfie with Jimin in which Jimin is seen performing finger horns over the former’s head as they stand for the picture.

Benny enlisted the help of BTS members Jin, Jimin, V, and Jungkook for the song “Bad Decisions.” He represents every Army ever through this MV. In the video, a beaming Benny expresses excitement about going to a BTS performance and reveals his fanboy side. The singer collects BTS memorabilia, and there are plenty of pictures of the septet in his apartment. Additionally, he painstakingly creates a cake decorated with the official BTS insignia. He accidentally ruins his cake due to traffic while traveling to the location. But when he arrives at the venue, a frustrated Benny leaves his car in the middle of the street and discovers that he arrived 28 hours before the show. Then he is informed that he has made