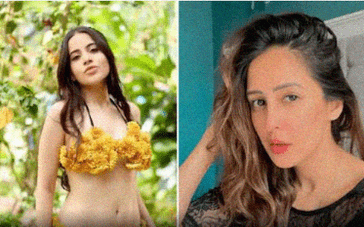 OTT Bigg Boss fame Urfi Javed has always attracted attention for her eccentric clothing choices and sense of style. Her unconventional clothing frequently caught people’s attention. While many praise her for being daring, some people don’t like the clothes she wears. The actress Chahatt Khanna is the most recent famous person to attack Urfi.

Urfi was recently seen in Mumbai wearing a yellow translucent dress and bikini top. When posting her images online, Chahatt commented, “Who wears this? And in public areas? Would somebody really take off their clothes and become famous because of the media? Is the Indian media really so weak? It’s simple to purchase the cheap exposure, and media coverage, and show you’re endorsing for our generation. Who would spend money on spotting, do anything, or even go nude and carry? This is so depressing! May the knowledge of God be with you.

Quick enough to respond appropriately, Urfi Javed attacked Chahatt’s private life. At least I don’t buy followers, she wrote. Additionally, if you did your homework, you would know that I was there for an interview and that I was dressed accordingly, which is none of your concern. You’re only envious because, despite the fact that you paid the paps, they did not cover you. What anyone does on this planet is none of your business, Chahatt Khanna, therefore why didn’t you upload this tale for Ranveer Singh? demonstrates your hypocrisy. Why judge me when I didn’t judge you for your two divorces and dating much younger men?

Later on, Urfi Javed also posted a picture of Chahatt Khanna from the past, in which the actress was posing while wearing a backless dress. Urfi posted the image on social media and commented, “So you’re allowed to post such photographs on social media for everyone to see? Is social media your primary source of news, then? You are a bully and you are envious of my love. I’m sorry about your daughter. Who is their mum like?”

In addition, Urfi said, “At least I make my own money and am not dependent on my two ex-husbands’ alimony! Khanna Chahatt I’m not here to pass judgement on how you live your life. I have no idea why these aunts are against me.

Chahatt, who no longer wanted to participate in the debate, wrote: “I don’t need to be a part of this drama, but it’s important to let my followers know. People talk and a few bark a lot, but people who know me know I’ve worked hard to come here and achieve a lifestyle and not alimony. Please go check records first before talking, haven’t taken a single penny ever. Also, my divorce could have been easily targeted; everyone is aware of this. However, people with class would never act in such a manner. I also don’t hold paid media or those without class in the same regard.

A well-known name in the television industry, Chahatt Khanna has appeared in programs like Bade Achhe Lagte Hain. Bigg Boss OTT, a reality program hosted by Karan Johar, helped Urfi Javed gain popularity. Despite the fact that she was evicted after the first week, her dress sense has since gained notoriety.