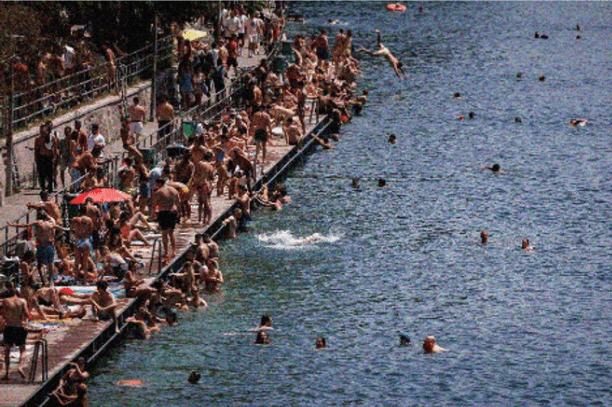 In Western Europe, people are swarming to parks and swimming pools in search of some relief from the early heat wave that caused temperatures to exceed 40 degrees Celsius (104 degrees Fahrenheit) in France and Spain.

A/P BERLIN — In Western Europe, people went to parks and swimming pools on Saturday to escape the early heat wave that caused temperatures to soar beyond 40 C (104 F) in France and Spain.

Germany’s health minister warned those in vulnerable groups to drink plenty of water as highs of 38 C (100.4 F) were predicted there.

Older folks can die from heat and dehydration, tweeted Karl Lauterbach. The elderly and people with disabilities need to be watched out for today.

Meanwhile, officials issued a warning about the possibility of wildfires in the western Mediterranean area due to the combustible combination of high temperatures and a protracted dry spell.

The Copernicus Emergency Management Service of the European Commission stated that the fire risk was “severe” and “very extreme” across areas of mainland Italy, Sardinia, the Rhone River Valley in France, and much of Spain.

A helicopter and 12 firefighting planes from the 27-nation bloc are on the alert to help nations dealing with big fires this summer.

The situation was deemed “very uncommon” by French meteorologists, who forecast that a peak temperature of 43 C (109.4 F) might be attained on Saturday before thunderstorms brought cooler air in from the Atlantic.

The early heat wave is a portent of things to come, according to experts, as climate change makes extreme temperatures, which are typically only observed in July and August, more likely to occur in June as well.