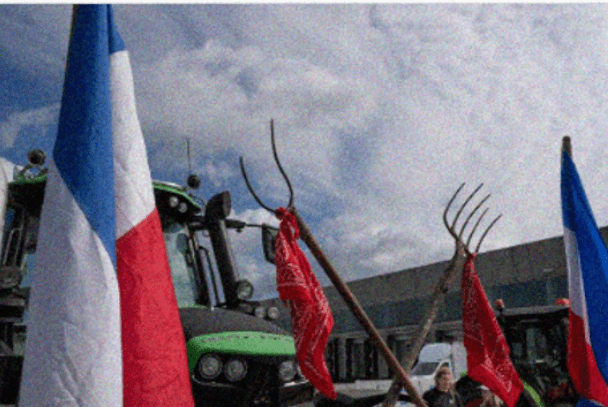 Last month, a man was convicted of dumping straw on a Dutch road and sentenced to 80 hours of unpaid community service.

THE HAGUE, Netherlands – A man was found guilty on Thursday of dumping straw on a Dutch road last month and sentenced to 80 hours of unpaid community service work, in one of the first cases stemming from widespread farmer protests against government plans to reduce nitrogen emissions.

The 42-year-old man, whose identity was not revealed by the court in Arnhem, was also ordered to pay 3,600 euros (approximately $3,700) in damages to cover the costs of the cleanup operation.

On July 28, he and about 30 other demonstrators partially blocked a highway by dumping garbage on the road, including manure, plastic straw, and sawdust, according to the court.

“By participating in this action, the man created a dangerous situation for road users,” the court stated, adding that the defendant, who was arrested at the scene and spent four days in jail, apologized in court.

The court stated that “he had not carefully considered the consequences for others and indicated that he deserves punishment for this.”

Dutch farmers have launched a series of disruptive protests this summer, including dumping trash on roads and blocking supermarket distribution centers, in response to the government’s announcement earlier this year that it wants to cut nitrogen emissions by 50% by 2030, including ammonia produced by livestock.

The leader of the Netherlands’ top agricultural lobby group said the first round of talks on emissions reduction goals with a delegation led by Dutch Prime Minister Mark Rutte on Aug. 5 delivered “too little” for thousands of farmers living in uncertainty.

Later Thursday, Mark van den Oever, the leader of one of the radical farmers’ groups, Farmers Defence Force, said in a YouTube post that the group was suspending “hard” protests “until further notice” as a gesture of goodwill and urged Rutte to discuss additional ways of reducing emissions with farmers.