×
Newsyolo.com > Political > Feel good | O’Rourke is optimistic about his 2020 campaign. 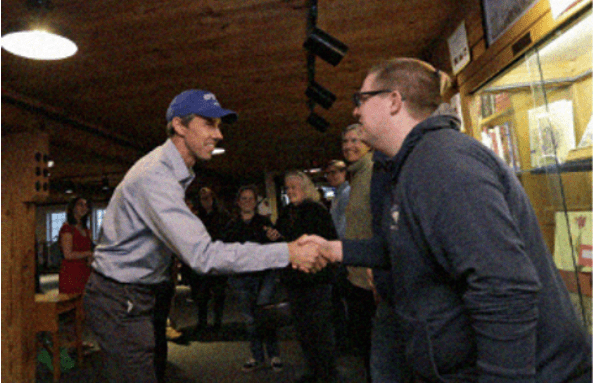 Feel good | O’Rourke is optimistic about his 2020 campaign.

The 2020 Democratic presidential candidate said he feels “very happy about the way we’re campaigning,” despite recent headlines that read “Beto O’Rourke Blew It” and “The Beto Balloon Bursts.”

On Sunday morning’s episode of CBS’ “Face the Nation,” O’Rourke declared, “I’m going to folks where they are in their neighborhoods.” “No matter to me. I don’t care if they are rural or urban, red or blue; I’m there to listen to them. From what they have to say, I can infer that they want this country to unite over our shared problems. I, therefore, pay them more attention than I do the headlines.

In a recent Vanity Fair cover article, O’Rourke, a former congressman from Texas, was quoted as saying: “I want to be in it. I was born to be in it, man. The piece was interpreted by many as reflecting an entitlement that he was born to be president, even if he has subsequently clarified that he meant he felt he was destined to be a public servant.

The host of “Face the Nation,” Margaret Brennan, questioned O’Rourke on his ability to overcome the negative publicity surrounding that incident and, people every initial perception of him.

“I’m going to have to travel everywhere, meet everyone, leave no one behind, and take no one if I want to have any chance at all.” as standard,” he stated. So that’s what I’m concentrating on.

There will be highs and lows in this campaign, he continued. “There have been in every one of my campaigns. But I don’t believe anything can stop us if we remain committed to the people — the core reason why we’re doing this in the first place — bringing them in and allowing them to contribute to the answers to the problems we face.

In response to Brennan’s assertion that O’Rourke’s campaign significantly depends on him being a younger candidate, particularly when running against fellow Democrats Joe Biden and Bernie Sanders, both of whom are in their 70s, O’Rourke responded that the nation needs “to be able to bring in a new vitality.”

We must be able to register new voters, he declared. “We must ensure that our severely damaged democracy serves the needs of everybody. All I’m trying to say is that the way I’m running my campaign — this relentless pursuit of people wherever they are, learning their stories, incorporating what’s most important to them in their lives into this campaign and into the service I want to provide for this country — is what we need right now when the country is so deeply divided. I will therefore continue to provide my services in that manner.