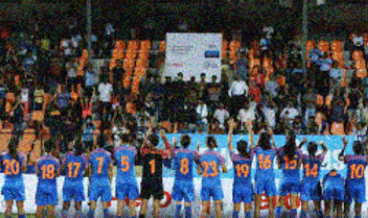 Another narrative about harassment in the Uttar Pradesh women’s football community has surfaced in the wake of reports of charges of misconduct against assistant coach Alex Ambrose of the Indian U17 Women’s squad.

In 2014, Mohamed Shamsuddin, the Uttar Pradesh Football Sangh’s general secretary at the time, was detained for sexually harassing a player on a women’s football team preparing to compete in the senior women’s championships in Assam.

Shamsuddin was not just a high-ranking official in the state but also the AIFF’s deputy chairman of the audit and finance division.

The entire women’s squad gathered in front of Shamsuddin’s home after the terrible incident and yelled anti-perpetrator chants.

Shamsuddin was suspended by the Olympic Association of Uttar Pradesh after waiting a few days for an official announcement from the AIFF and the UPFS.

But what happened next was a complete shock, as the player and the entire team who had helped her through the trying time had the entire squad withdrawn and a second string made up of improvised players from different sports sent to compete in the competition.

Even worse, Shamsuddin was permitted to keep his position at the AIFF while the players were penalized by being denied access to the event.

Given that everyone is presumed innocent unless proven guilty, the AIFF did nothing, giving Samsuddin the benefit of the doubt.

Samsuddin was the subject of additional complaints of harassment, which included the time the deputy chairman bullied a player and her father while he was holding up the distribution of a player’s due certificate by demanding an apology from the parent.

Samsuddin never experienced an AIFF or UPFS suspension. Before his passing in the year 2020, he also served on the AIFF executive board for a period.

Instead of attempting to resolve the situation and bring the abused player justice, both the AIFF and UPFS kept quiet about the situation to protect their patrons.

Referring back to the recent case of Alex Ambrose, which has drawn the ire of numerous state football associations calling for a severe reprimand to be meted out to the assistant coach for his improper behavior while in charge of the Under 17 team on an exposure tour in Europe before the upcoming Under 17 Women’s World Cup, there is a call from the populace to investigate the individual state FAs and the formation of a more stringent system to protect the athletes’ physical well-being.

It also seems essential to have a platform where athletes may express their concerns without suffering unfair treatment. A procedure must be put in place to prevent athletes who voice complaints from being cornered.

To protect the athletes’ athletic and personal integrity, mechanisms must be put in place that will allow them to voice their concerns without worrying about being stopped from doing what they love or having their names dragged through the gutter.