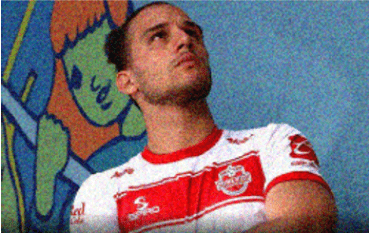 One of the few things that keep football fans interested during the protracted and frequently boring off-season is the presentation of new uniforms. Well, the Mexican football team Mineros de Zacatecas’s plan didn’t work out.

The team has been mocked online after the eagle-eyed supporters discovered something odd in the images of the club’s new jersey. In addition to the stunning artwork on the walls behind the players, there was an improper sketch that the PR team missed.

Beautiful images of the team’s players wearing the home, away, and goalkeeping kits were assembled into an exhibition by the club. At first, everything seemed to be going according to plan; several people praised the photos on social media.

That is until viewers began seeing the offensive and filthy graffiti in the background. The promotional image was entirely ruined by a sketch of male genitalia that could be seen in the picture right above the player’s elbow.

Mine workers in Zacatecas are already regretting not checking the images before posting them online. They are garnering international attention but this is not how they would have wished to achieve such acclaim.

They have only been playing semi-professional football since 2014 for the Liga de Expansion MX club. The club’s name, Mineros (Miners), was chosen since the city is well-known for its silver mines, which were uncovered in the late 16th century and are credited with helping the city get started. One of the world’s top producers of silver and gold is Zacatecas.

They likely wouldn’t have attracted much interest outside of Central America before this summer, but after people missed the fact that pictures of athletes sporting their new jerseys with crude phallic lettering on the walls behind them, they are now going viral for all the wrong reasons. has