×
Newsyolo.com > entertainment > For the Indian premiere of The Gray Man, Russo Brothers will appear with Dhanush. 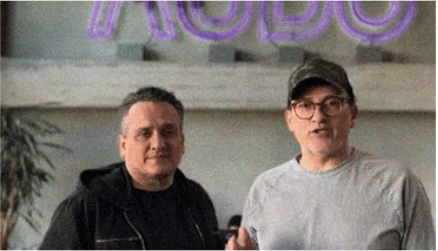 For the Indian premiere of The Gray Man, Russo Brothers will appear with Dhanush.

Dhanush praised the film, saying, “I got to do a little role in this movie full of amazing characters.”

Mumbai: According to a statement released by Netflix on Monday, Joe and Anthony Russo will attend the Indian premiere of their upcoming movie The Gray Man. On this occasion, superstar Dhanush will be joined by the directors of Marvel Studios’ Avengers: Infinity War and Avengers: Endgame. In a video message uploaded by Netflix India on its official Twitter page, The Russo Brothers informed their Indian followers of the news.

“Hello, everybody! I’m Joe Russo, and my brother Anthony Russo will be joining me in India to visit our great buddy Dhanush for our upcoming film, The Gray Man. India, get ready; I’ll see you shortly “the filmmakers state in the trailer.

Dhanush also discussed his experience filming the highly anticipated action thriller, whose character in The Gray Man is referred to as a “lethal force.”

“It was amazing. This film is an emotional roller coaster with plenty of action, drama, pace, and chase scenes. I’m incredibly glad that I was allowed to play a small part in this film about amazing people “In the video, the National Award winner stated.

According to Netflix, starting on July 12 viewers can enter to win passes to The Gray Man premiere in India. To join, they can visit www. the gray man. in.

The Gray Man is CIA agent Court Gentry (Ryan Gosling), also known as Sierra Six, who is recruited by his handler Donald Fitzroy (Billy Bob Thornton), after being expelled from federal prison.

“Gentry was formerly a highly proficient, authorized death trader by the Agency. The roles have now been reversed, and Six is the target of Lloyd Hansen (Chris Evans), a former CIA coworker who will do anything to eliminate him. Ana de Armas’s agent Dani Miranda has his back. He’ll require it, “read the official summary for the movie.

In addition to Rege-Jean Page, Jessica Henwick, Wagner Moura, Alfre Woodard, Julia Butters, Eme Ikwuakor, and Scott Haze, The Gray Man is based on the same-titled book by Mark Greaney.