×
Newsyolo.com > Sports > Fourth-seeded Stefanos Tsitsipas is stunned by Nick Kyrgios at Wimbledon in 2022 after a heated exch 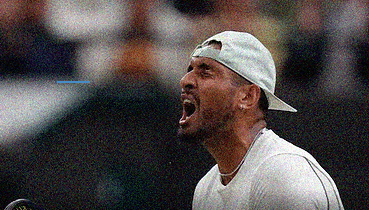 A wild and spectacular Wimbledon third-round brawl between Australian maverick Nick Kyrgios and fourth seed Stefanos Tsitsipas that had the potential to get out of hand occurred on Saturday. Kyrgios defeated Tsitsipas.

Although the 27-year-old Kyrgios played brilliant tennis to win the match 6-7(2) 6-4 6-3 7-6(7), the match will be remembered mostly as one of the most heated ever witnessed at Wimbledon.

Even with Rafa Nadal competing on Centre Court, the much anticipated Court One match was the most popular event in town.

It also did not let down, with exhilarating tennis surrounded by chaos as both players lost their composure.

The unseeded Kyrgios emerged from the pandemonium with one of his best Grand Slam triumphs, edging a tense fourth-set tiebreak after saving a set point in front of a loud crowd and with the lights on.

With a drop shot, Kyrgios won the match and will advance to the Round of 16 for the fourth time with strong title hopes.

The unseeded American Brandon Nakashima is up next.

After losing a heated Wimbledon third-round match against Nick Kyrgios on Saturday, Stefanos Tsitsipas called the Australian player a “bully” with “an awful aspect” to his personality.

Throughout the match, Kyrgios engaged in continuous conversation with the umpire, yelled obscenities, and angered his opponent to the point that Stefanos Tsitsipas nearly lost the match by intentionally hitting a ball into the spectators.

It was simple to feel sorry for Tsitsipas, 23, who won the opening set 7-6(2) but lost his cool after becoming entangled in what he called a Kyrgios circus.

Tsitsipas expressed his views following his bruising loss on Court One.

“Yes, he bullies constantly; that’s what he does. He intimidates his opponents. He most likely bullied kids in school himself. Bullies bother me,” Tsitsipas declared.

“I dislike people who denigrate other people. He also possesses some admirable qualities. However, he also has a very dark side that, if revealed, may do a lot of hurt and bad to those around him.

On Saturday, Kyrgios was warned for cursing and then demanded that Tsitsipas be forfeited when the Greek smashed a ball close to a spectator’s head after losing the second set. Kyrgios was fined $10,000 during his first-round encounter for spitting toward a fan.

Tsitsipas apologized for losing his composure but expressed frustration that the Australian was not given a harsher penalty by the officials.

“I wish we could all agree on a rule and implement it. I’m not sure. anything to do with speech. Why on earth would you talk while playing? It’s absurd,” he declared.

“I feel like something was going on on the other side of the net throughout every single point I played today,” the player said.

“In a way, that’s his way of controlling the opponent and distracting you. Nobody else on the field performs this. No other player is constantly angry and dissatisfied with something like this.

“I truly hope that all of us athletes can think of anything to make this a cleaner version of our sport, having this kind of behavior not acknowledged, not authorized, not tolerated.”

Tsitsipas acknowledged attempting to crush Kyrgios in the third set.

He said, “I was going for my opponent’s body, but I missed by a lot. “I don’t usually play like this. But I can’t just stand there and appear robotic-like I’m unfeeling and uninformed.

“Because you’re over there working and there’s noise coming from the opposite side of the court for no real reason,” the speaker said.