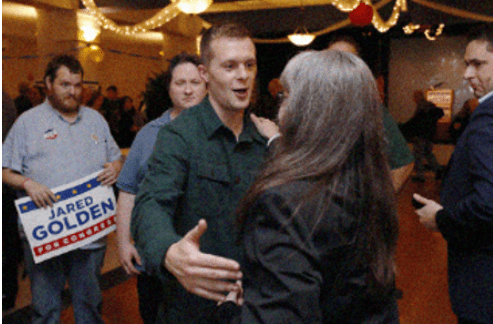 With five GOP seats still to be called and Republican Rep. Bruce Poliquin still involved in a lawsuit against Maine’s secretary of state over the election, Democrat Jared Golden has upset Poliquin in Maine’s 2nd District, increasing Democrats’ net gain in the House to 36 seats.

According to the office of the Maine secretary of state, Golden received 50.5 percent of the vote against Poliquin’s 49.5 percent. Golden’s victory marked the 20th district that Democrats won that had been supported by President Donald Trump in 2016. It was also the first House contest ever determined using a ranked-choice voting system.

Poliquin, along with other plaintiffs, is suing the state for the voting system, which they claim is unconstitutional. Poliquin confirmed in an email statement that he intended to proceed with the lawsuit. A federal judge rejected Poliquin’s plea for an urgent injunction to halt the tabulation on Thursday morning.

Poliquin declared in a statement that “it is now clearly obvious that I won the constitutional ‘one-person, one-vote first choice election on Election Day, which has been employed in Maine for more than a century.” We’ll continue to raise our constitutional objections to the rank vote methodology.

In Maine, voters rank the candidates they prefer, which enables an “immediate runoff” by counting second-place votes from voters who backed the last-placed candidates. This process is repeated until a candidate wins with more than 50% of the vote. The method was recently authorized by Maine voters in a ballot initiative, and it is now used for federal elections but not for state legislature or gubernatorial races.

In the first-place vote count, Poliquin beat Golden by 46.4 percent to 45.5 percent. But once the ranked-choice votes were tallied, Golden, a Marine veteran, and state representative won.

With roughly $13 million in outside spending, the campaign between Poliquin and Golden became the most costly in the history of the state. By 10 points, the district voted for Trump in 2016.

Golden received a boost in the second round of voting thanks to the two independent candidates on the ticket, Tiffany Bond and William Hoar, who both urged their supporters to place Golden ahead of Poliquin as their second option.