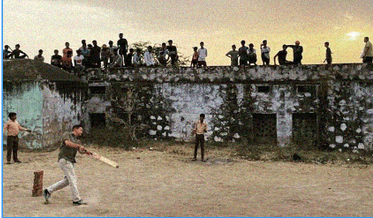 A photo from Jeremy Renner’s visit to Alwar in Rajasthan has been uploaded online.

On a recent sunny summer day, the kids of Alwar, Rajasthan, played gully cricket. There was nothing unusual about this besides the presence of a superhero. We’re referring to Jeremy Renner, a member of the Avengers, who recently played cricket with the youngsters in Alwar while visiting India. The actor Jeremy, who portrays Hawkeye in both the Marvel Cinematic Universe (MCU) and the show of the same name, posted a photo of himself playing cricket with the youngsters. In the picture, Jeremy is seen batting on a typical neighborhood field with bricks serving as the wickets while a group of kids watches him from atop a wall.

In the picture, Jeremy Renner is wearing a military-green shirt with beige jeans. What a blessing of life to explore, learn from, and be inspired by people and places all around the world, he wrote in the caption. The Rajasthani city of Alwar was indicated by his geotag.

Comedian Katie Cazorla responded to the post by writing, “You are a treasure.”

In the comments section, a number of the actor’s supporters also welcomed him to the nation.

Jeremy Renner arrived in Delhi last week and released a video from the opulent hotel where he is staying. In the video, the actor was greeted with a variety of delectable treats that were MCU-inspired. The shield of Captain America, the helmet of Iron Man, Hawkeye’s bow and arrow, and the green fist of the Hulk were all on the platter. However, Jeremy was more interested in a tiny teddy bear that was included in the goody bag. He wrote, “Another avenger added…. ” in the caption. Name and superpower would you please?

The 51-year-old actor has not specified if he is traveling to India for personal or business reasons.