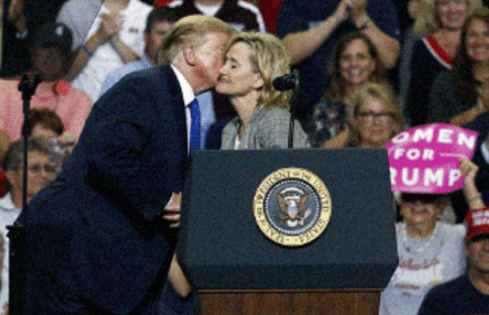 Later this month, President Donald Trump will travel to Mississippi to rally support for Republican Sen. Cindy Hyde-Smith, whose once-certain bid for another two terms in the Senate has grown more tenuous in light of remarks about a public hanging and voter suppression.

The National Republican Senatorial Committee anticipates spending over $1 million on a TV ad blitz to support Hyde-Smith before Election Day on November 27. Trump’s visit has been planned for a few days.

Gov. Phil Bryant appointed Hyde-Smith in March to fill out the remainder of retiring Republican Sen. Thad Cochran’s term, which ends in January 2021. Hyde-Smith will face Democrat Mike Espy in the runoff.

However, since a video showing the senator suggesting that she would be in “the front row” if she were invited by one of her supporters to a “public hanging” surfaced on social media on Sunday, her campaign in the deeply conservative state of Mississippi has come under intense national attention.

Another video of Hyde-Smith making the statement that “there are a lot of liberal folks in those other schools who that maybe we don’t want to vote” went viral on Thursday. Perhaps we want to create it. simply a little more challenging. So, I believe that’s a fantastic concept.

Democratic expectations that the party could be able to barely win a Senate seat in an overwhelmingly conservative state have been boosted by the high-profile gaffes made by national Republicans in the last weeks of the campaign. In the 2016 presidential election, the president carried Mississippi by roughly 18 percentage points.

On November 26, the night before the election, Trump is expected to speak at two Make America Great Again rallies in Tupelo and Biloxi supporting Hyde-Smith. Those events will be the president’s first campaign engagements following his frenzied tour of the nation to promote the midterm elections on November 6.

According to Trump campaign COO Michael Glassner, “President Trump is so devoted to bringing out the vote for Cindy Hyde-Smith that he arranged two rallies in the wonderful State of Mississippi on the day before the run-off election.” “On November 27, Election Day, the President needs all hands on deck so he can continue to rely on Senator Hyde-great Smith’s support for his America First program.”