×
Newsyolo.com > Business > IMF | US must go through “pain” to reduce inflation 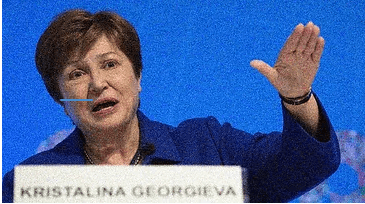 IMF | US must go through “pain” to reduce inflation

According to the international lender, the US may have to experience a recession to control inflation.

The president of the International Monetary Fund (IMF) suggested on Friday that the United States may have to experience economic “pain” to control excessive inflation, adding that a downturn may be the “necessary price to pay” for recovery.

IMF Managing Director Kristalina Georgieva anticipated a challenging road ahead for the US economy, which is now dealing with decades-high inflation and skyrocketing costs for many basic commodities.

She said this shortly after the IMF lowered its growth projection for the US by nearly a full percentage point, to 2.9 percent. “Success over time [in cutting prices] will be helpful for global growth, but some pain to get there that success can be a necessary price to pay,” she added.

The United States has a “narrowing road to averting a recession,” Georgieva continued, but combating inflation must be the “top priority,” even if it results in a slowdown in the economy.

The second-ranking official at the IMF’s Western Hemisphere branch, Nigel Chalk, also raised the possibility of a recession but projected that any dip would be brief by citing the country’s healthy labor and savings markets.

The remarks from the global lender came after the US Federal Reserve last week passed the biggest increase in interest rates in 28 years, which Fed chief Jerome Powell described as an effort to fight inflation. However, he has since admitted that the central bank has no control over the prices of several essential commodities, such as food and gasoline, saying “There’s anything that we can do” about rising oil and grain prices.