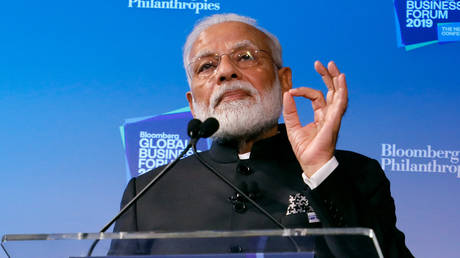 India explains why stricter regulation of digital currencies is necessary.

PM Narendra Modi cautioned a global gathering about the use of cryptocurrencies to finance terrorism.

Narendra Modi, the prime minister of India, has called for more stringent regulation of digital currencies to stop them from being used to fund terrorist organizations. Speaking on Friday in New Delhi at the No Money for Terror Ministerial Conference on Counter-Terrorism Financing, Modi stressed the serious security risk posed by “private currencies.”

He said that “challenges from the dark net, private currencies, and more are emerging” and that “there is a need for a uniform understanding of new finance technologies.” “New kinds of technology are being used for terror funding and recruitment,” he said.

“A unified system of checks and balances and regulation can emerge from a uniform understanding,” Modi continued.

Modi had previously attacked cryptocurrencies. He forewarned that if Bitcoin and its ilk fell into the wrong hands, they could “spoil our youth.” Despite declaring last year that it would outlaw “all private cryptocurrencies” and introduce an official digital currency, India chose to tax cryptocurrency profits at a 30% rate earlier this year. In India, there are thought to be 15–20 million cryptocurrency investors.

India is by no means the only nation to have thought about repressing decentralized digital currencies. The EU announced changes to its anti-money-laundering regulations earlier this month that would forbid banks and cryptocurrency exchanges from dealing in privacy coins like Monero, which, unlike Bitcoin, hides its blockchain data from the general public. Additionally, providers of digital assets would need to confirm customers’ identities even for rare transactions worth less than €1,000 ($1,040) and find out the details of larger transactions.