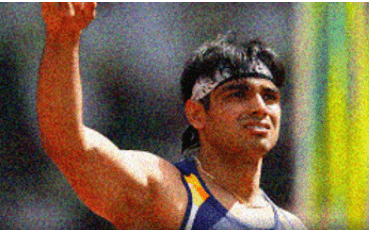 Olympic champion javelin thrower Neeraj Chopra is poised to secure his first Diamond League podium result in his first appearance in four years at the renowned one-day event here on Thursday thanks to a solid start to the season.

After placing second in his event at the Paavo Nurmi Games in Turku with a huge national record throw of 89.30 meters, the 24-year-old Chopra went on to win it in the Kuortane Games with a respectable throw of 86.60 metres in dangerous conditions.

Both competitions in Finland featured competitive fields, however, Turku’s lineup featured more notable athletes than Kuortane, where Chopra slipped during his third attempt owing to slick conditions brought on by rain. Fortunately, he got to his feet right away and won the competition without suffering any injuries.

It was a little late because we only began training in December. During a news conference before the event, Chopra stated, “I needed to get fit again because my weight had also increased since the Tokyo Games.

“I had put on 13 to 14 kg, so the goal was to get back in shape, which is why we started the season a little later.

Given that the Asian Games have been postponed, he continued, “Our main targets this year are the World Championship and Commonwealth Games.

Chopra will be making his Diamond League debut after placing fourth with an effort of 85.73m in Zurich in August 2018. Three in 2017 and four in 2018 saw him compete in seven Diamond League meets, but he hasn’t yet taken home a medal. He placed fourth twice, the other time coming in Doha in May 2018 with a throw of 87.43 metres.

Chopra’s greatest competition before the World Championships in Eugene, USA, next month will be the prestigious one-day meet in the Swedish capital. With all three medalists from the Tokyo Olympics in the mix, he will also be competing against the hardest field of the season thus far.

Johannes Vetter, a German thrower who now has the most throws of 90 or more, is still watching from the s

Chopra moved to Uppsala, less than 100 kilometres from Stockholm, after winning gold at Kuortane, where he was previously located. He will not compete in any events following the Diamond League and before the July 15–24 World Championships.

The Grenadan Anderson Peters, the current world champion, has been defeated twice this month by the Indian superstar. Peters has seen a dip in form after winning the Doha Diamond League meet with a season-leading throw of 93.07m.

Peters’ physical condition might also be a problem because, despite posting the best throw of 71.94 metres last week at an event in Orimattila, Finland, he did not finish all of his throws.

Czech Republic’s Jakub Vadlejch, an Olympic silver medalist, and Vitezslav Vesely, a bronze medalist from the Tokyo Games, will also compete. This will be the first time this season that all of the medal winners from the Tokyo Olympics will compete together.

Vadlejch, who had the best throw of 83.91 metres and finished sixth at the Paavo Nurmi Games, is back after missing the Kuortane Games.

The same is true for Julian Weber of Germany, who returned after placing fifth with 84.02m in the Paavo Nurmi Games.

After skipping the Kuortane Games, Oliver Helander of Finland, who unexpectedly won gold at the Paavo Nurmi Games with a long throw of 89.83m, will also be in action.

Murali Sreeshankar, another Indian, was scheduled to compete in the meet in the long jump, which is not a competition on the Diamond League schedule. It is included as an extra event. However, he won’t be able to travel to the Swedish capital because the US Embassy in New Delhi is holding up the processing of his passport to obtain a visa for the World Championships taking place next month.