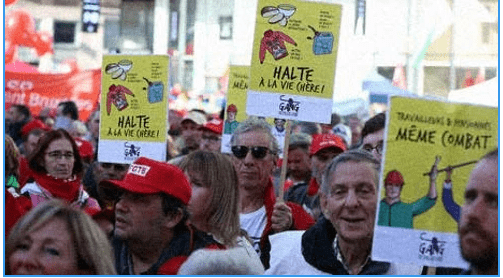 More than 10,000 protesters marched through the streets of the Belgian capital to voice their opposition to rising costs.

On Wednesday, thousands of protesters marched through Brussels as part of a “national day of action” to call for greater wages and lower energy costs. Over 10,000 people reportedly descended on the Belgian capital after it was discovered that 64% of the populace fears they may not be able to pay their expenses.

Trade unions in Belgium, who organized the protests, assert that the average energy cost for families in the nation has already tripled to much than €700 ($691) per month.

The General Labor Federation of Belgium’s chairman, Thierry Bodson, addressed thousands of union activists at the Place de la Monnaie and said, “It’s not that we don’t want to pay, but we can’t pay. Bodson noted that it is “totally difficult” for someone making less than the average Belgian family’s monthly income of €2,500 ($2,468) to pay their bills.

Bodson criticized the government’s advice to residents to use less energy, calling it “pointless” given that the majority of Belgians had already taken all reasonable steps to reduce their energy usage but that it was still insufficient.

In the throng, signs that read “Freeze prices, not people” and “Everything is going up except our wages” echoed Bodson’s comments.

The demonstrators are calling on Belgian authorities to take stronger action to address soaring prices and argue that they should obtain more funding from energy corporations who have recorded record profits this year and profited billions while the common person’s standard of living has declined.

According to data released by Belgium’s Statbel statistics office last month, the country’s inflation rate increased to 9.94% as a result of a rise in energy costs, nearly breaking the previous high criticized of 1976.

The next five to ten winters will be challenging, according to Belgian Prime Minister Alexander de Croo, but the country will survive the crisis “if we help each other in these trying times,” he said.