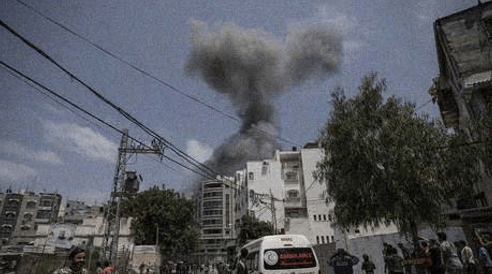 The most recent round of combat, which started on Friday, would conclude with a truce if the Palestinian Islamic Jihad accepts the agreement.

Israel accepted a Gaza ceasefire on Sunday that had been arranged by Egypt, according to Reuters. It is yet unknown if the contract will be approved by the Palestinian Islamic Jihad (PIJ). As the word spread, the terrorists kept firing rockets toward Israel.

As an intelligence group from Cairo arrived in Israel on Saturday, Egyptian President Abdel Fattah al-Sisi declared that Egypt has “established contacts with everyone” to resolve the rapidly rising crisis between Israel and the PIJ.

Reuters was informed by Egyptian sources on Sunday that the Israeli side had accepted the delegation’s proposal for a truce to start later in the evening. The leadership of the PIJ must now choose whether to accept the truce if the story is accurate.

AFP was informed by a source within the terrorist group that it is taking part in the ceasefire negotiations.

Early on Sunday afternoon, the PIJ intensified its rocket attacks against Israel; air raid sirens sounded in Ashkelon and other settlements close to the Israeli state’s border with Gaza, and several missiles threatened the city of Beersheba. Over two days of warfare, over 500 rockets were launched from Gaza, but the Iron Dome missile defense system reportedly intercepted 97% of them, according to the Israel Defense Forces (IDF).

In retaliation, Israel struck what it claimed were PIJ “rocket launch stations” in Gaza and posted a video of airstrikes on these targets.

Taysir al-Jabari, a prominent PIJ commander, was killed in an airstrike on his residence on Friday, marking the start of Operation Breaking Dawn, an Israeli military operation. Other attacks targeted the group’s observation stations, warehouses, and launch pads, while an Israeli bombing on Saturday night claimed the life of a top PIJ leader, according to the IDF on Sunday.

Israel has called the attacks “targeted” and claimed that Operation Breaking Dawn was started in response to the imminent threat of an attack by the PIJ after the group’s head was taken into custody on Monday. However, according to Palestinian sources, 265 Gazans have been injured and 31 people have died in Gaza, including six children.

At least nine of these fatalities, which the IDF attributed to a Palestinian rocket that missed its target after launch, have been refuted by Israel.

It is unclear whether the PIJ wants to accept the Egyptian-brokered truce after several of its senior commanders were murdered or taken into custody. On Sunday, a group spokesman asserted that the militants had only used “a small part” of their arsenal and urged Palestinians in the West Bank to take part in their offensive. The main militant organization in Palestine, Hamas, has so far refrained from joining the present battle.

Israeli Intelligence Minister Elazar Stern told Army Radio that Israel has “made very major successes in the operation” and that the IDF will “continue to respond” to rocket assaults before the prospective ceasefire became public knowledge. Stern asserted, “If [the PIJ] demands a deal… we aren’t seeking conflict,” nevertheless.