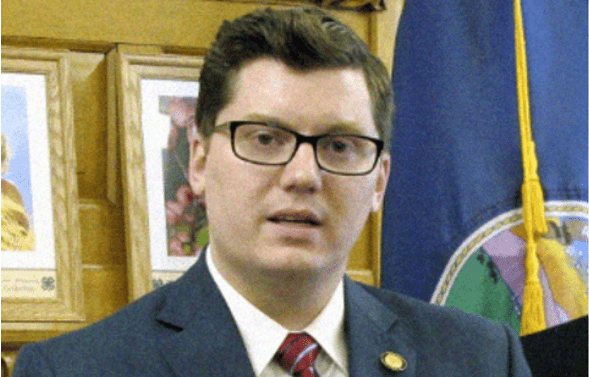 Jake LaTurner, a Republican from Kansas, is abandoning his Senate bid in favor of taking on freshman Rep. Steve Watkins in the primary.

The decision was made public on Wednesday by state treasurer LaTurner, who did not specifically mention Watkins but stated that the district’s inhabitants “deserve a solid conservative warrior they can rely on.”

In an interview with POLITICO, LaTurner said, “At the end of the day, we don’t want to see another congressional seat go to the Democrats in Kansas. Without a doubt, Congressman Watkins jeopardizes this seat this cycle.

In recent weeks, Watkins has dealt with resignation rumors as well as a persistent, covert whisper campaign over his candidacy. Last month, Watkins’ chief of staff referred to the reports as “absurd,” and the congressman tweeted that he was not retiring.

Watkins won his 2018 race by less than a percentage point; LaTurner cited Watkins’ poor fundraising and a “lack of coalition building” as reasons the incumbent was vulnerable next year. LaTurner repeatedly declined to discuss the current rumors about Watkins, calling it a “sideshow” and asserting he was not “going to get into rumor or innuendo.”

LaTurner, 31, said that neither he nor other leaders of the House GOP or the National Republican Congressional Committee had spoken with him, but he anticipated doing so in the future.

According to him, this seat is at risk of falling into [Democratic] hands. “I’m running this contest on facts,” he stated. “I won’t address any of the rumors that have been circulating. That isn’t appropriate, in my opinion.

The contrast between the two, according to Bryan Piligra, a spokesman for Watkins, would be “a life of service versus a life of self-service.”

Jake LaTurner has spent his entire career climbing the political ladder, and that rise will come to an end in August, according to Piligra.

The Senate race may also be completely changed by LaTurner’s action. To succeed retiring Sen. Pat Roberts, he had been one of six Republicans running in a primary. Last week, former governor Jeff Colyer urged LaTurner to change her primary, arguing that doing so would open up the crowded Senate primary and improve Republicans’ chances of holding the state’s 2nd Congressional District, which Watkins narrowly won in 2016.

The most well-known candidate for the Senate seat right now is Kris Kobach, a Republican who ran unsuccessfully for governor of the state last year. But party leaders in Washington are opposed to his run because they think it will jeopardize the red state’s chances in the general election. Susan Wagle, the president of the state senate, is likewise running, and Rep. Roger This weekend at the state fair, Marshall, who is generally anticipated to run for the Senate, will reveal his plans for the next year.

Despite his statements to the contrary, Senate Republicans still favor Secretary of State Mike Pompeo as their nominee and still see him as a viable option. June of the next year is the filing deadline.

When questioned about Pompeo on Tuesday, Majority Leader Mitch McConnell responded, “He’s my top pick.” I’m aware that the president probably loves him where he is and that he was an excellent secretary of state. He would be our first option if he chose to choose a different course, though.