×
Newsyolo.com > Sports > Kick of | EFL clubs will talk about the energy situation when Mansfield moves the kickoff. 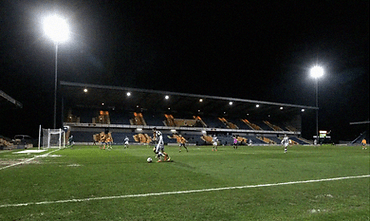 Kick of | EFL clubs will talk about the energy situation when Mansfield moves the kickoff.

EFL clubs will talk about the energy situation when Mansfield moves the kickoff time to 1 PM.

The English Football League will meet the following week to explore strategies to address the energy issue. Mansfield Town will try moving the start time of one of their League Two games to see how much money it will save on floodlight use and other expenses.

The EFL discussed the matter, which has been on the agenda for some time, at its most recent board meeting and will poll its clubs at a future meeting to identify any potential issues.

Rick Parry, the EFL chairman, and Trevor Birch, the chief executive, will preside over the meeting on Thursday. Given the differences in club finances, it is acknowledged that a one-size-fits-all strategy is unlikely to succeed. To “discern whether considerable savings may be made,” Mansfield claimed they have moved their game against Walsall from 3 pm to 1 pm on October 15.

Mansfield stated that “the club is working to offset the impending, significant increase in energy bills.” The club will also be able to better assess if an earlier kick-off on a Saturday would have an impact on potential attendance after the trial of this adjustment in kick-off time.

The EFL’s first team to do this is Mansfield. Mansfield submitted a special application to the league by the rules, and safety advisory committees approved it. Clubs know in private that turning off the floodlights won’t solve the energy situation. Even though kickoff times will be two hours earlier, there may still be a need for floodlights, especially with the next winter season. Given that any possible savings could be offset by fewer attendees and lower gate proceeds, the choice is not simple. Teams that travel may additionally need to account for overnight accommodations.

According to a study conducted over the previous two weeks by the football reform organization Fair Game, 12 EFL teams were among the 40 clubs surveyed who claimed they would explore earlier kickoffs to cut costs. In the study, clubs gave the cost of living situation a seven out of ten worry rating, whereas League Two teams gave it an eight out of ten ratings or higher. 40% of the 40 clubs reported that they were getting ready to examine their non-playing staff expenditures, and 60% stated they were thinking about stopping ground upgrades.

Eighth-tier Didcot Town asked the Southern League in a letter on Friday to support any demands for earlier kickoff times as teams fight against rising costs.

We need your help with a tiny favor because you are joining us from India today. Since the Guardian began publishing 200 years ago, tens of millions of people have put their faith in our fearless reporting, turning to us in times of difficulty, uncertainty, camaraderie, and hope. We are now financially supported by more than 1.5 million donors from 180 different nations, keeping us open to everyone and adamantly independent.

The Guardian does not have shareholders or a billionaire owner, unlike many other publications. Just the will and enthusiasm to produce high-impact global reporting that is never influenced by business or politics. Such reporting is essential to democracy, fairness, and the ability to hold the powerful accountable for their actions.

And we offer all of this for free, so anyone can read it. We act in this manner because we support information equality. More people will be able to follow the developments that are changing the globe, comprehend how these events affect individuals and communities, and are motivated to take meaningful action. Regardless of their ability to pay for it, millions can profit from free access to high-quality, accurate news.