×
Newsyolo.com > Business > Labor court | Starbucks is being sued by the Labor Board for alleged violations 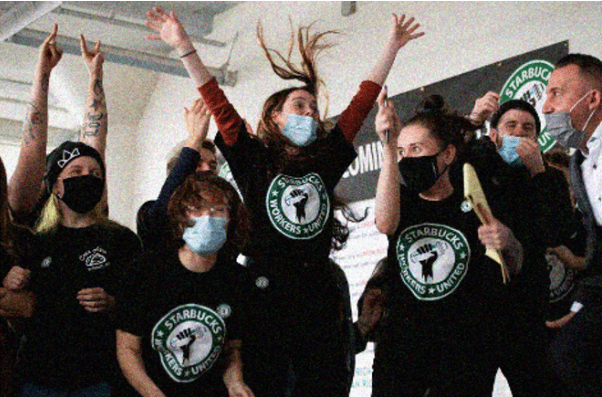 Starbucks is being asked by the National Labor Relations Board to stop obstructing unionization attempts at its American stores.

Starbucks is being asked by the National Labor Relations Board to stop obstructing unionization attempts at its American stores.

Since December, when a store in Buffalo, New York, became the coffee chain’s first unionized branch in decades, the board has sued Starbucks three times in federal court. Since then, at least 151 U.S. stores have voted to unionize, and more than 289 have petitioned the NLRB to hold union elections.

The petition was submitted to the western New York U.S. District Court on Tuesday by the NLRB’s regional director in Buffalo, New York. It requests that the court order Starbucks to restore seven employees from Buffalo who it claims were wrongfully fired for attempting to organize a union. Additionally, it tries to compel Starbucks to negotiate with a store whose union election Starbucks is accused of tainting through persistent anti-union action.

But more broadly, the petition asks the court to order Starbucks to stop engaging in several actions at all of its U.S. locations, such as providing benefits to non-union stores, threatening retaliation against staff members who support unionization, refusing to negotiate with locations that have voted to organize, and closing down stores either temporarily or permanently.

A Starbucks location in Ithaca, New York, which had voted to unionize, will be permanently closed, the company said earlier this month. The corporation, according to retail staff, is taking action in retaliation for its labor activism. Starbucks, which runs 9,000 outlets across the U.S., claimed it constantly opens and closes stores and bases its decisions on staffing issues and other issues with the particular site.

The NLRB said in its petition that Starbucks broke many labor laws in Buffalo, including monitoring employee talks on their headsets to learn about unionization efforts, promised greater pay and benefits if they resisted joining a union, and questioning workers for donning union pins.

Starbucks Corp., based in Seattle, was contacted for comment on Tuesday.