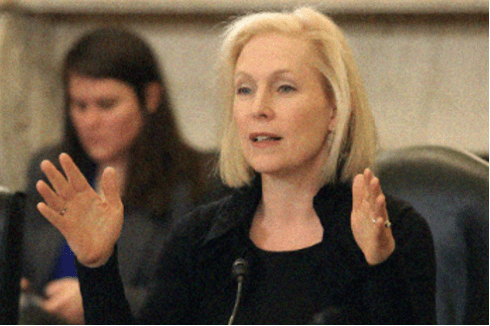 Sen. Kirsten Gillibrand (D-NY) defended her office’s handling of sexual harassment claims from last summer on Monday evening and expressed “full confidence” in Jess Fassler, her former chief of staff who recently took on the role of campaign manager for her presidential run.

The inquiry was “thorough and professional,” “thorough and full,” “professional and thorough,” and it was also done “thoroughly and correctly,” according to Gillibrand, who answered questions for a short while outside the Capitol.

“As we do in other situations, we take these kinds of charges very seriously,” she said, adding that she had no misgivings about the way the office handled the inquiry.

It was the first time the senator fielded inquiries regarding the incident from last summer, which resulted in the resignation of a young female staff member in disapproval of the office’s behavior, The story was first covered by POLITICO on Monday morning.

One of Gillibrand’s longtime staffers allegedly made repeated inappropriate sexual approaches against a female staffer in her mid-20s shortly after the senator promised him he would be elevated into a supervisory role over her, according to a report submitted last July. He was married and ten years her senior. She further asserted that the assistant routinely made lewd and derogatory remarks about other female employees and potential employees

The office decided that the charges did not “meet the level of sexual harassment” following “a full and thorough review into the evidence, including multiple interviews with current workers who may have witnessed this behavior.”

Abbas Malik, Gillibrand’s longtime driver, and military adviser were accused of making one inappropriate remark that was corroborated, according to Gillibrand’s office. Malik was disciplined, including having a prospective promotion and raise taken away from him.

The woman frequently claimed that two important former coworkers who could support her claim of improper workplace behavior would be contacted by the office, but they were not. One of them told POLITICO that Malik once made a joke about sexual abuse and called her fat and ugly to her face. She stated that once when they were talking, he said that a woman “couldn’t get laid unless she was raped.”

Since the woman left the workplace this summer, according to Gillibrand, she and she have not communicated.

“I relied on and trusted your assertion that you need to draw a line in the sand and declare that nothing is acceptable. On her last day, the woman delivered a letter of resignation to the senator and her top aides, stating, “None of it is acceptable. “Your office opted to depict my experience as a misperception instead of what it was—harassment and, eventually, intimidation—going against your public conviction that women shouldn’t accept sexual harassment in any manner.”

Neither Gillibrand nor her staff replied to the letter.