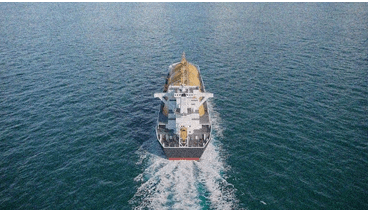 The ship’s operator Dynagas LNG claims that the charters have been taken over by the authorities.

According to marine operator Dynagas LNG, the British daily the Telegraph claimed on Thursday that Germany has taken possession of three liquefied natural gas (LNG) carriers that were previously under the ownership of Russian energy giant Gazprom.

As of the time that this report was being written, Gazprom has not confirmed the seizure.

The company claimed that the German government had seized the charters for its three LNG ships, which were formerly bound to Gazprom Germania, a German subsidiary of Gazprom.

The Amur River and Ob River, two of the three vessels, had previously been rented to Gazprom Germania until 2028. The Clean Energy was the third tanker, and the contract for her was in effect until 2026. According to Monaco-based Dynagas, all three are now essentially under the German government’s “indefinite” control.

Berlin recently took over Gazprom Germania, which once ran some of Germany’s largest natural gas storage facilities, as part of the sanctions against Russia connected to Ukraine. In reaction, Gazprom stopped delivering gas to the firm, which led to cash flow issues and compromised the operations of the unit’s major gas merchants in Germany and the UK.

Securing Energy for Europe is the organization that the German energy regulator acquired control of after intervening to save it from bankruptcy. Midway through June, rumors started to circulate that Berlin would lend the company €10 billion ($10.4 billion) to keep it afloat.