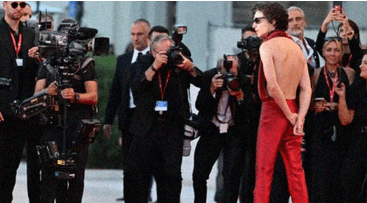 Timothée Chalamet is the first guy to ever appear alone on the print edition cover of British Vogue, making him a historical figure.

The US actor poses for a photo shoot done by editor Edward Enninful on the cover of this month’s magazine while sporting a pearl necklace.

Timothée explains in an interview inside that while they were collaborating on the Netflix comedy Don’t Look Up last year, Leonardo DiCaprio gave him some straightforward business advice.

He claims Leo instructed him, “No heavy drugs and no superhero flicks.”

Timothée, a star of Little Women, is renowned for his flair and chic red carpet attire.

The 26-year-old can be seen in one photo in the October edition sporting a mohawk in place of his distinctive curly hair, while in another, he is sporting a leather jacket and leather pants.

To have a male on the cover of the fashion magazine for the first time in its 106-year history, Enninful said he waited “for the timing to feel perfect.”

Timothée is described by the author as “a young actor at the height of his early career, who recalls the Deans and DiCaprios of bygone eras, but with a relationship to a new generation that dismantles bygone ideals of masculinity.”

Timothée says it is an “honor” to be a Vogue cover star, joining celebrities like Rihanna, Billie Eilish, and Lady Gaga, in a video interview with Enninful.

He also discusses how the Covid epidemic helped him realize that, like everyone else, he had to cope with “real adulting.”

He admits, “I ought to have started trying to get my grownup feet under me a little bit earlier than I did.”

Although some Twitter users have noted that Zayn Malik appeared on a digital cover in 2018, Timothée may be the first man to be on the print cover solo in the UK.

Harry Styles, a former member of One Direction, made news throughout the world in 2020 when he appeared on the cover of the magazine’s sister edition, US Vogue, wearing a dress.

Timothée rose to fame after starring in the 2017 film Call Me by Your Name, for which he was also nominated for an Academy Award.

He will play a part in the planned musical about Willy Wonka’s youth, the Willy Wonka prequel.