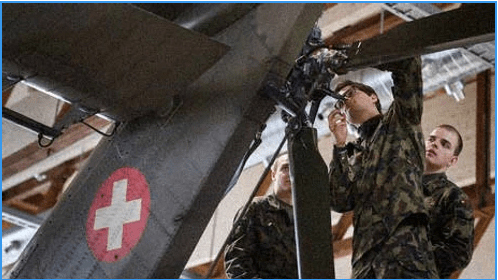 The Swiss government is attempting to stop its military forces from significantly shrinking.

Switzerland’s ATS news agency said on Wednesday that due to a lack of army troops, women may soon be required to serve in the military. Less than 1% of the Swiss Army’s volunteers now are women, and future projections indicate a sharp decline in the total number of soldiers.

The upper chamber of the Swiss parliament has received a report on the lack of personnel in the country’s military forces and civil protection, according to the ATS. Ministers have suggested two solutions to the problem.

According to the paper, “the first is to make service mandatory for Swiss women, which would make it possible to double the numbers.”

The Norwegian government’s 2013 introduction of gender-neutral conscription served as the model for this concept, the Swiss government stated in March.

The Federal Council also suggests combining the civil service and civil protection into one new entity that would deal with “disaster protection.” Women would be hired in this situation voluntarily, just as they are now. According to the administration, the army would continue to receive preference in the hiring process over the new entity.

The Swiss Army is required to have 100,000 soldiers, and all Swiss men who are physically capable must serve in the military starting at the age of 19.

Senator Werner Salzmann, cited by the ATS, asserted that, in the event of mobilization, only 80% of soldiers might be summoned to duty. The SwissInfo news agency earlier stated that, by 2030, the army of the nation, which currently has 140,000 members, is projected to drop to just 30,000 people. To “ensure the personnel of the armed forces and civil protection in the long term,” the Swiss Defense Ministry stated it was looking at various solutions in the spring.

The Swiss Armed Forces are primarily in charge of national defense while Switzerland continues to declare itself a neutral nation. They take part in peacekeeping missions but abstain from taking part in international hostilities. The Organization for Security and Cooperation in Europe has previously received assistance from the Swiss military in Bosnia and Herzegovina. Several dozen Swiss soldiers also participated in an Afghan peacekeeping mission. Switzerland is a member of the commission that oversees the armistice between North and South Korea and is known as the Neutral Nations Supervisory Commission.