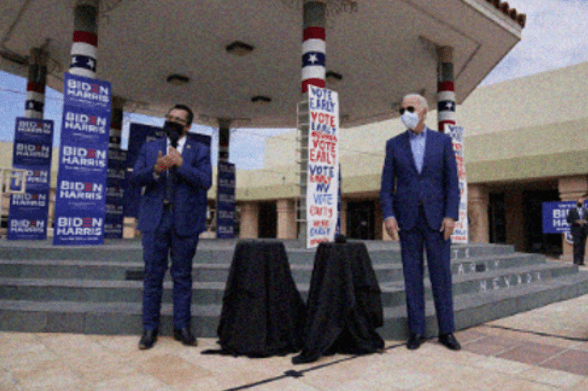 The Western swing state went to Hillary Clinton in 2016.

According to a recent poll of the Western swing state of Nevada, Democratic presidential contender Joe Biden has maintained his single-digit lead over President Donald Trump there.

The Times/Siena Nevada poll, which was first released earlier this month, had Biden leading Trump by 6 percentage points, or 48 to 42 percent, at the time.

In a different Times/Siena Nevada poll conducted last month, Biden had a 4-point advantage against Trump, 46-42. the average of recent Nevada polls performed between September 20 and October by RealClearPolitics On November 11, Biden leads Trump by 5.2 percentage points.

As Biden gained pace in swing areas in the Midwest and some Southern battlegrounds that the Republicans won four years ago, Trump is now attempting to flip Nevada. In previous election cycles, Nevada alternated between supporting the presidential candidates of both major parties, favoring Republican George W. Bush in 2000 and 2004 and Democrat Barack Obama in 2008 and 2012.

The most recent Times/Siena poll, which had a plus or minus 3.8 percentage point margin of error, was conducted from October 23 to 26 and included 809 likely Nevada voters.