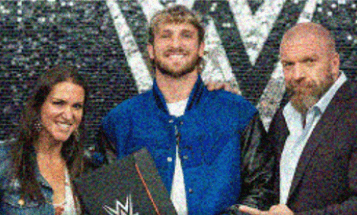 On Thursday, the American YouTube phenomenon Logan Paul formally agreed to a contract with the world of professional wrestling. The business shared the information on its social media: “BREAKING: @loganpaul signs WWE contract officially.”

Paul also informed his followers of the news by sharing a photo on Instagram in which he is pictured with Triple H holding the contract and Stephanie McMohan, the acting CEO of WWE. “Just signed with the WWE,” the YouTuber’s caption read.

Paul reportedly consented to sign a multi-event contract with WWE that included involvement in several premium live events (formerly known as pay-per-views) and appearances on regular episodes of WWE, according to ESPN (SmackDown).

The 27-year-old wrestler made his official WWE debut at the signature event Wrestlemania XXXVIII, where he faced off against Rey Mysterio and Dominik Mysterio in his first tag-team match with The Miz. However, following the altercation, Miz turned on Paul, forcing the internet sensation to rip into him during his unexpected signing.

The YouTuber-turned-wrestler posted pictures of his trip to the WWE corporate office, and one of the images featured a hastily written message addressed to The Miz that read, “COMING 4 U @MIZ.”

In a recent press conference, the WWE also declared that the former teammates would no longer be allies. Following rumors that they would reunite, Paul made it plain that he wants revenge at SummerSlam, according to WWE’s press release.

In the beginning, Paul and his brother Jake Paul produced videos for websites like YouTube. Jake Paul entered the world of boxing in recent years, and Logan Paul joined the WWE. The pair has since gone on to new activities. Paul also has a varied level of success as a boxer, an entrepreneur, and a collector of Pokemon cards.

The American has his podcast called “Impulsive,” which has nearly 4 million subscribers on YouTube and has guests such as athletes, comedians, business moguls, and celebrities. At the moment, Paul’s main YouTube channel has 23.5 million subscribers.