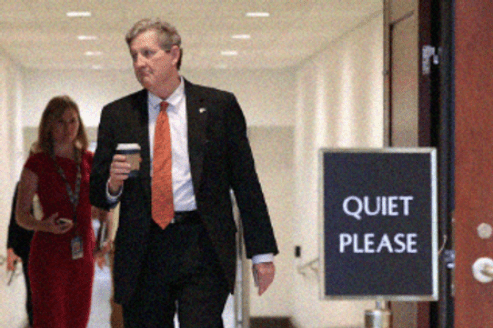 Sen. John Kennedy, a Republican from Louisiana, has decided against running for governor of his home state in 2018. Kennedy prefers to remain in the Senate, where he has earned a reputation for making quotable remarks and prowling in front of cameras.

The conservative Republican said in a statement on Monday that he realized he is more effective in the Senate on a trip to China last month. His advocacy against the export of synthetic pharmaceuticals on that journey, together with the support of the presidents of each country, “certainly made me feel that our trip to Beijing was meaningful,” he claimed.

“I enjoy serving in the US Senate. In 2019, I won’t run for governor,” Kennedy declared. I believe I belong in the Senate.

“I hope someone runs for governor who realizes that Louisiana state government does not have to be a large, slow, stupid, inefficient, occasionally corrupt, spend money like it was ditchwater, anti-taxpayer, top-down institution,” said one voter.

Kennedy has alternated in recent weeks between giving reporters his corny lines and criticizing Louisiana Democratic Governor John Bel Edwards for mismanaging the state. According to him, Gov. Edwards has “taken my state on the wrong path,” so if he ran, he would win, he claimed in an interview last week.

After Kennedy’s statement, Edwards responded to the criticism, saying, “For Sen. Kennedy, this was never about the people of Louisiana. This was done to draw attention to himself.

Even Nevertheless, many Republicans believed Kennedy would choose to run for governor given that he had emphasized surveys that predicted his victory. Kennedy admitted last week that he was “very torn” as he struggled to make a choice.

Rep. Ralph Abraham (R-La.), meanwhile, expressed interest as Kennedy thought about it, creating the possibility of a close race between the two GOP members. Abraham may now be in a position to join Bel Edwards in the top-two runoff election in the following year.