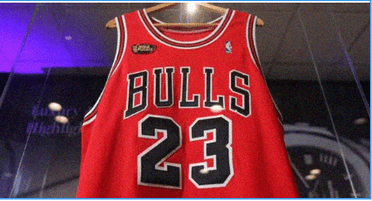 It is the highest price ever paid for a piece of athletic memorabilia that was used during a game.

It was reminiscent of a sporting season in which Michael Jordan won his sixth and final NBA championship, as detailed in the Netflix documentary The Last Dance.

Sotheby’s reported that a total of 20 bids were placed on Jordan’s Chicago Bulls jersey on Thursday.

Bidders were “excited to acquire a rarefied piece of history,” according to Brahm Wachter, head of streetwear and current collectibles at Sotheby’s.

According to Wachter, “Today’s record-breaking outcome… confirms Michael Jordan as the indisputable G.O.A.T, confirming his name and unparalleled legacy is just as significant as it was almost 25 years ago.” An abbreviation for “best of all time” is G.O.A.T.

The price of the jersey broke the previous record of $9.28 million, which was paid for a shirt worn by soccer legend Diego Maradona at the 1986 World Cup.

A Sports Illustrated magazine from June 1998, with Jordan on the cover, was also auctioned off alongside the item.

Jordan is regarded by many as the greatest basketball player in history. He played the majority of his career for the Chicago Bulls, developed into a global hero, and contributed to the NBA’s increased notoriety.

The Chicago Bulls won the following three games of the NBA Finals despite losing the first game against the Utah Jazz. Next, Utah Jazz won by a two-point margin.

With only 5.2 seconds left in the sixth game, Jordan gave the Bulls the lead 87-86 and sealed his fourth NBA championship.

Basketball fans from all over the world applauded the comeback.

Following the murder of his father in North Carolina in October 1993, Jordan abruptly ended his career in basketball. The superstar had won three consecutive championships while leading the Chicago Bulls to seven scoring titles.

Jordan stated, “I have always highlighted… that it’s time to quit when I lose the sense of motivation and the sense to prove something as a basketball player.