×
Newsyolo.com > Latest > Man United to fire Ronaldo and sue him, according to the media 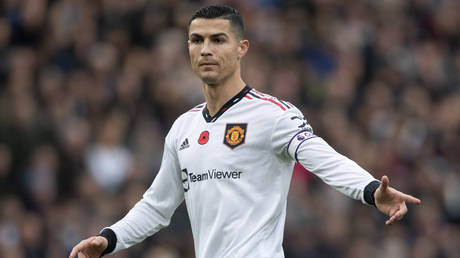 Man United to fire Ronaldo and sue him, according to the media

The star forward recently gave a fiery interview in which he attacked several club officials.

In response to Cristiano Ronaldo’s inflammatory TV interview with Piers Morgan, in which the footballer disparaged prominent members of the club, Manchester United has confirmed that they are taking “appropriate steps.”

The fallout from the extraordinary interview between Ronaldo and Morgan that aired on UK TV this week in two parts and was drip-fed to the media for a few days is still going on.

The 37-year-old forward claimed, among other things, that United “betrayed” him after he returned to Old Trafford last year, that he “doesn’t have respect” for manager Erik ten Hag, and that United’s US owners, the Glazer family, “don’t care” about the team.

United released a formal statement on Friday in response to the fan unrest and media commotion, saying they had “initiated appropriate steps in response to Cristiano Ronaldo’s recent media interview.”

The message continued, “We will not be providing any additional comment until this process is complete.

Numerous media outlets, including ESPN, have reported that the Old Trafford giants are now attempting to sever Ronaldo’s relationship with the team and may also sue him for breach of contract.

Ronaldo won the Champions League and a hat-trick of Premier League titles during his first stint with United before leaving for Real Madrid in 2009. Ronaldo then made a triumphant return to his former team Juventus in the summer of 2021.

The five-time Ballon d’Or winner led United in scoring last season with 24 goals in 38 games played in all competitions.

But ever since Ten Hag took over in the summer, there have been doubts about Ronaldo’s ability to fit into the Dutchman’s preferred high-pressing style, which has limited his use.

Before the start of the new season, Ronaldo and his agent Jorge Mendes tried to arrange a transfer away from Old Trafford but were unsuccessful in doing so.

Ronaldo is currently playing for Portugal as they get ready for the World Cup in Qatar, but by the end of the competition, he might not have a club.