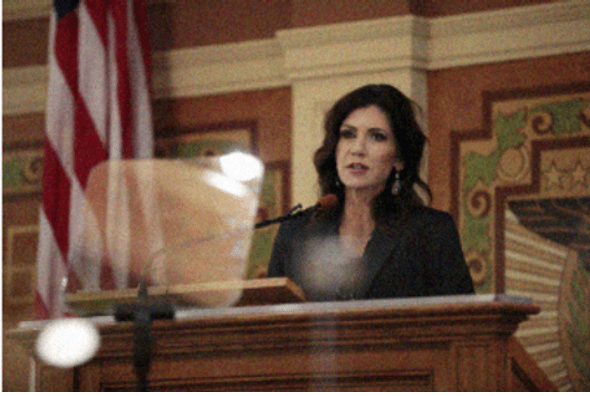 The governor of South Dakota, who is frequently cited as a contender for 2024, won’t be up for reelection for a few years.

Kristi Noem, a potential 2024 candidate, has already chosen a side in the dispute between prominent Republicans about how closely to link the party to former President Donald Trump.

According to a POLITICO-obtained invitation, the governor of South Dakota will visit fundraisers at Trump’s Palm Beach club Mar-a-Lago next week. The March 5 event will be hosted by Donald Trump Jr. and his fiancée Kimberly Guilfoyle and is intended to raise money for Noem’s reelection campaign.

It’s unofficially Trump Jr.’s first fundraising event of the new election cycle, and it’s a precursor to how the former president’s son plans to enlist the support of the Trump acolytes in the coming years. Of course, Trump himself hasn’t indicated what he plans to do, thus Noem and other potential 2024 contenders are currently on hold.

Noem and the pair have some common history. She spoke at Trump’s July 4 celebration at Mount Rushmore in South Dakota last year, which Guilfoyle had to miss because she tested positive for Covid-19 just before. Noem commemorated the event by giving Trump a $1,100 replica of Mt. Rushmore that featured his face on the monument, according to financial disclosure documents that were made public last month.

Noem is up for reelection in 2022 and has been considered a potential presidential contender, even though she received only 1% of the vote in a recent POLITICO/Morning Consult poll. Noem will also appear at the Conservative Policy Action Conference this weekend in Orlando and at a donor event for the Republican National Committee in April in Palm Beach.

Public health professionals have criticized Noem for her mostly lax response to the outbreak. With only 885,000 people, South Dakota has seen more than 1,800 deaths from COVID-19. In contrast, South Korea, a nation of over 52 million people, recorded 1,573 fatalities as of Tuesday.

According to the invitation for the event on March 5, becoming a host entails making a donation of $4,000 for an individual or $8,000 for a couple. This will entitle you to a private roundtable discussion, photo opportunity, and cocktail reception with Noem, Guilfoyle, and Trump Jr. To enter the cocktail party and attend the fundraiser, you must make a minimum donation of $1,000.

Noem’s spokesman declined to comment. Questions were sent to a spokesperson by Trump Jr., who declined to respond.