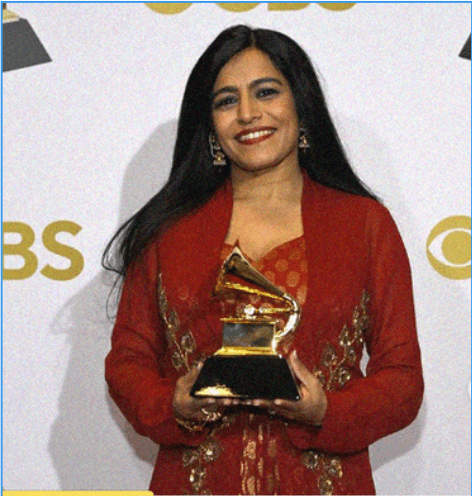 The only lady of Indian descent with two Grammy nominations in the Best Children’s Music Album category is Falguni Shah.

Falguni Shah, an Indian-American singer, received a Grammy Award for Best Children’s Album for her album A Colorful World. Falguni Shah, better known by her stage as Falu, expressed her joy after winning. Falguni Shah claimed that she posted images from the Grammy Awards 2022 on social media “The magic of tonight is beyond words. What a privilege it was to sing for the GRAMMY Premier Ceremony’s opening number and then receive a statue on behalf of all the amazing individuals who contributed to A Colorful World. We are grateful to the Recording Academy for this outstanding award and are humbled by it. MANY THANKS!”

Activate by 123 Andres, All One Tribe by 1 Tribe Collective, Black to the Future by Pierce Freelon, Crayon Kids by Lucky Diaz, and the Family Jam Band were also up for the award for best children’s album.

Falguni Shah is the only woman of Indian descent to have two Grammy nominations for Best Children’s Music Album and has also performed and collaborated with music legend AR Rahman. For her 2018 album Falu’s Bazaar, Falguni Shah was previously nominated for a Grammy in the same category.

Falu has received tuition in both the Banaras and Jaipur styles of thumri. She has also worked with musicians from other countries, including Wyclef Jean, Yo-Yo Ma, Philip Glass, Ricky Martin, and Blues Traveler.

The Bruno Mars-led Silk Sonic group took home two prestigious Grammys in 2022: Record of the Year and Song of the Year for their song Leave The Door Open.