×
Newsyolo.com > entertainment > Met Gala 2022: Oscar Isaac, star of the movie Moon Knight, wore a dress, while his wife appeared in 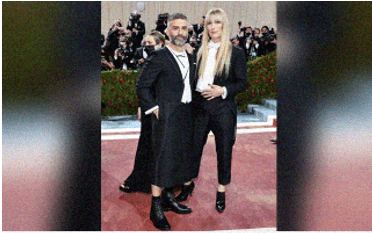 Met Gala 2022: Oscar Isaac, star of the movie Moon Knight, wore a dress, while his wife appeared in

Talk about creating a couple of goals at the Met Gala in 2022.

Oscar Isaac, the hero of Marvel’s Moon Knight, made a stylish appearance at the Met Gala at the Metropolitan Museum of Art in New York. With his spectacular red carpet ensembles, the actor and his wife Elvira Lind revolutionized the idea of power dressing. Elvira Lind, his wife, and fellow filmmaker rocked a sharp suit, while Oscar Isaac sported a black fitted dress with a white tie. She completed the ensemble with a complementary bow tie. Thom Browne created the clothes worn by both celebrities. Talk about achieving both your romantic and aesthetic goals at once.

Oscar Isaac and Elvira Lind were photographed at the Met Gala here:

Oscar Isaac’s gender-neutral choice for such a significant fashion event was adored on Twitter. We concur with the fan who tweeted, “Oscar Isaac my man looks so fine.”

Another fan said, “So you’re telling me that Oscar Isaac is wearing a goddamn frock and his wife is wearing a suit and they’re simply wonderful.”

Blake Lively and their husband Ryan Reynolds attended the Met Gala this year, along with other famous couples. The hosts kept the actors quite occupied. Kim Kardashian and Pete Davidson went to the event together. The famous dress that Marilyn Monroe wore for the first time at President John F. Kennedy’s 45th birthday celebration in 1962 was worn by Kim.