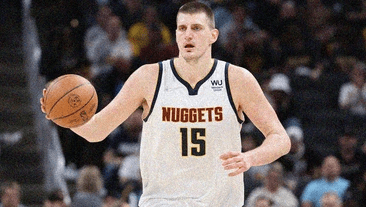 Nikola Jokic, a standout with the Denver Nuggets, reportedly received the highest salary in NBA history.

The Denver Nuggets and Nikola Jokic, a towering Serbian center and two-time NBA “Most Valuable Player,” have reached an agreement on a massive five-year, $270 million contract extension, according to his agents, who verified the news to ESPN. This is the largest contract in league history.

Given his veteran status with the Nuggets, the conditions of the agreement, which is a so-called “supermax” extension, imply that the 27-year-old is now committed to the Colorado-based franchise for a total of six seasons at a hefty total cost of $303 million.

A player must be selected for the all-NBA team or have won the MVP or Defensive Player of the Year in one of the previous three seasons to be eligible for a supermax deal.

The Serbian superstar, who was selected in the second round of the 2014 NBA Draft, averaged 27.1 points, 13.8 rebounds, and 7.9 assists throughout his 74 games last season. When he defeated Joel Embiid of the Philadelphia 76ers to win the award, he became just the 10th player in NBA history to win two consecutive MVP awards.

Jokic is credited with changing the way “big men” are used in the NBA. The 6’11” behemoth is praised for having a range of passing rarely seen in players his size; some have even said that he has the talents of a point guard but is built like a center.

Before being selected by Denver with the 41st overall choice in the 1995 NBA Draft, Jokic’s talent was first noticed in his native Serbia, where he was born in Sombor. Before becoming a four-time All-Star and a member of the All-NBA First Squad three times, he was named to the NBA All-Rookie team in 2016.

His ascent to superstardom and the Nuggets’ ascent to postseason contention are related events. Denver reached the Western Conference finals in 2020, during the NBA’s Covid-19 “bubble,” before falling to the Los Angeles Lakers.

Jokic averaged a remarkable 31 points throughout his five postseason games in 2022.

After injuries hampered the Nuggets’ performance in the previous season, most notably by keeping Jamal Murray and Michael Porter Jr. off the court for extended periods (or the entire season in Murray’s case), Jokic’s new contract will guarantee that the team’s key players are back on the court together next season.

The Nuggets are looking to make an impact on the upcoming NBA season; oddsmakers presently have them as the joint-seventh favorites to win the NBA championship the following year. The decision to lock down Jokic is the latest bold strategy by the Nuggets.