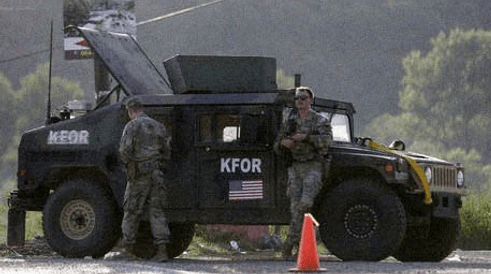 Among those who have landed in Kosovo are British troops.

Up to 1,000 additional soldiers from NATO have been sent to Kosovo for training, boosting the alliance’s presence there. A commander for the group suggested that more deployments could take place soon as military tensions with Serbia continue to simmer.

The soldiers were moved in “as part of standard contingency planning,” Colonel Christopher Samulski, a regional commander of NATO’s KFOR Kosovo mission, told reporters on Wednesday, according to Reuters.

Samulski did not specify the number of reserves present but stated that they constituted a “battalion-size” formation, with a battalion typically consisting of 500–1,000 soldiers. The First Fusiliers of the British Army are taking part in the training, according to the commander.

Typically, there are about 3,700 KFOR soldiers stationed in Kosovo at any given time.

Nearly ten years after NATO launched a bombing war against Serbia on behalf of ethnic Albanian rebels in the region, Kosovo declared its independence from Serbia in 2008. 97 of the 193 UN member states, most of which are allies of the United States, have recognized Kosovo’s independence. China, Serbia, and Russia are a few of the nations that do not acknowledge Kosovo’s independence.

After Pristina implemented a law outlawing Serbian-issued identification cards and that license plates for vehicles, tensions between Kosovo and Serbia grew in August. Local Serbs protested by creating barricades and engaged in violent altercations with Pristina’s forces as Kosovo attempted to impose the new measure by sending heavily armed special police to seize control of the Serbia-Kosovo border.

Kosovo subsequently consented to postpone the law’s implementation until September 1 and then extend the deadline to October 31. In light of the approaching deadline, Samulski stated that “additional reserves that lay beyond Kosovo” might be made available “should we consider that they are required, based on the existing situation on the ground.”

Kosovo has been charged with endangering Serbia’s security by stationing its special forces in border regions, according to Serbian President Aleksandar Vucic. Vucic cautioned MPs in Belgrade on Tuesday that “the risk is close, objective, and serious” after earlier promising to “rescue our people” in Kosovo from “persecution and pogroms” if necessary.