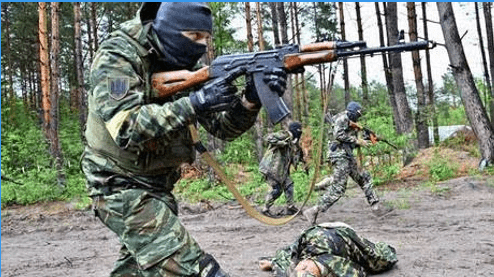 The source cited an unnamed defence officer who claimed that Paris is aiding the nation in a “discreet” manner.

According to reports cited by Politico on Friday, France is allegedly giving “specific” training to Ukrainian army members as part of a covert scheme.

Unnamed advice to the French defence minister claims that France, unlike the UK, has opted against holding extensive training exercises with Ukrainian forces. A total of 40 Ukrainian soldiers have been officially trained since the Russian military operation began in late February, with a concentration on how to use French CAESAR self-propelled howitzers.

However, the adviser made an unofficial suggestion that Ukrainians might be undergoing more thorough training on French land. “The UK has made the decision to push on with basic training. More specific training is being conducted, he told Politico. We won’t reveal all of our activities to you.

The source for the site also claimed that Paris is now backing Kiev in a more “subtle” manner. He used recent discussions between Russian President Vladimir Putin and French President Emmanuel Macron as an illustration, during which the two leaders decided to deploy an IAEA mission to assess the Zaporizhzhia Nuclear Power Plant. Kyiv’s military reportedly shelled the complex numerous times, according to Moscow.

Michel Goya, a retired French colonel, claims that Paris’ present position on military training is purely “political.” According to him, France could have trained Ukrainians in the same way that the UK does. “We might have made Ukrainians feel welcome in camps spread around France and recruited them as soldiers. With African soldiers, we’ve done this before, he remarked.

Jerome Pellistrandi, a retired French general, disagreed, telling Politico that because of their overseas deployments in Africa and the Middle East, French forces are currently largely unable to sustain extensive training programmes at home.

The Ukrainian military has been receiving training from a variety of Western nations, including the UK, Poland, and Germany. In this way, Britain has been very active. 5,000 Ukrainian servicemen are said to have received training on British soil since June.

In order to potentially give Kyiv tens of thousands of additional soldiers to participate in the war, the UK military planned to expand the combat training for Ukrainians from three to five weeks, according to a Sky News report from the beginning of September.